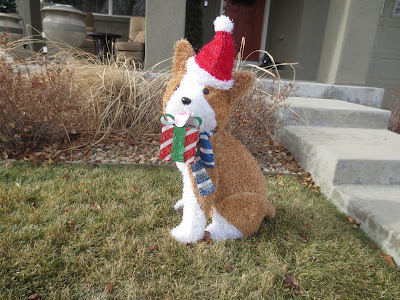 today's fictional story comes from the prompt at Sunday's Whirligig

Digging through the garbage wasn't getting him anywhere. It was cold, and he was dizzy from hunger and his paws hurt from the edge of the garbage can. He was thin, and you could see his hair was falling out just now when it was so cold and he needed all of it.

"Omg that dog is so scruffy, right? and thin? must be sick, stay away" said a passing girl.

Most of the people who walked by were too busy to even see him, and he kept to himself since that cat chased him two nights ago. As if he'd eat their mice, well, he might if it came to that.

Oh he was so tired, so hungry and so cold and so sad that he was alone. He was not meant to be alone, he was meant to sit in some lap and be petted.

Oh no! Who was that coming toward him... a big person, scary with a uniform. All dogs know a uniform is scary and not to be trusted... hey! hey stop reaching for me he thought as he tried to shrink into the back of the can.

"come on little fellow... aren't you cold and tired and hungry? You're certainly dirty! But you are a good fellow, and deserve to be taken care of right? Right! Come with me, that's right, see lick my hand, see that I won't hurt you... come on buddy. I'll fix you up. No more garbage for you... how long have you been out here anyway? Did you see a mean cat around here? you did?"

He was too tired to fight, and the man tasted okay, nice even. Like biscuits. And he felt safe when the man picked him up so he snuggled closer, and omg he was falling asleep.

Sam thought this pup was too cute to take to the station house, he'd take him to his vet, then maybe keep him. He'd been out here a long time from the looks of him. They drove to the vet, who checked him out, gave him a quick flea bath and some shots, said he was about 3 months old and probably a retriever.

Home it is then buddy!

Buddy said, okay Sam, that will be what you call me, and I'll be your best ever buddy. I can't remember a time when I felt full, and warm at the same time. And safe. With you. It's a miracle! Sam looked down at the little brown eyes, and the tiny pink tongue that wouldn't stop licking his hand. Spit. Puppy spit. Yep, let's go home now buddy!

This was joy. Sam had been so alone since his wife left, and joy was finding a friend.