This is my latest sketch. On vacation, I splurged at an art supply store for a small pad of heavy watercolor paper and have been comparing this to the non textured, thin paper I was sketching on previously. I used to paint on good paper, back when I painted a lot. I did a lot of landscapes and painted from real life. Disclaimer: I am not a trained drawing person. I sketch like a four year old but with more self-judgement.

They say, write what you know... so I usually draw what I see. Not this time, unless someone slipped a drug into my iced tea...   The process:
I started with a purple ink pen and drew the words making up a font as I went. Then the poodle, the swooping lines went on around the letters, then filled in the areas with random patterns. I've been drawing star people for the last thirty years. I wanted to channel Klimt so I compartmentalized the areas.

Then I got out the prismacolor watercolor pencils instead of regular paints and colored in the areas, and could still easily see the inked pattern under the color. I blended them a bit while coloring. Then I took a wet foam brush to the whole thing, and it began to go south, the inked lines blurred, the pencil color got muddy, and intensity was lost.

Lesson learned, use a small brush and go slowly to wet the pigment.
Then I went back in with lime green because adding a neutral like lime is always appropriate and makes a piece sing. I went over some of the lines again with a black marker, and  then brushed on some old Jacquard starBright paint. 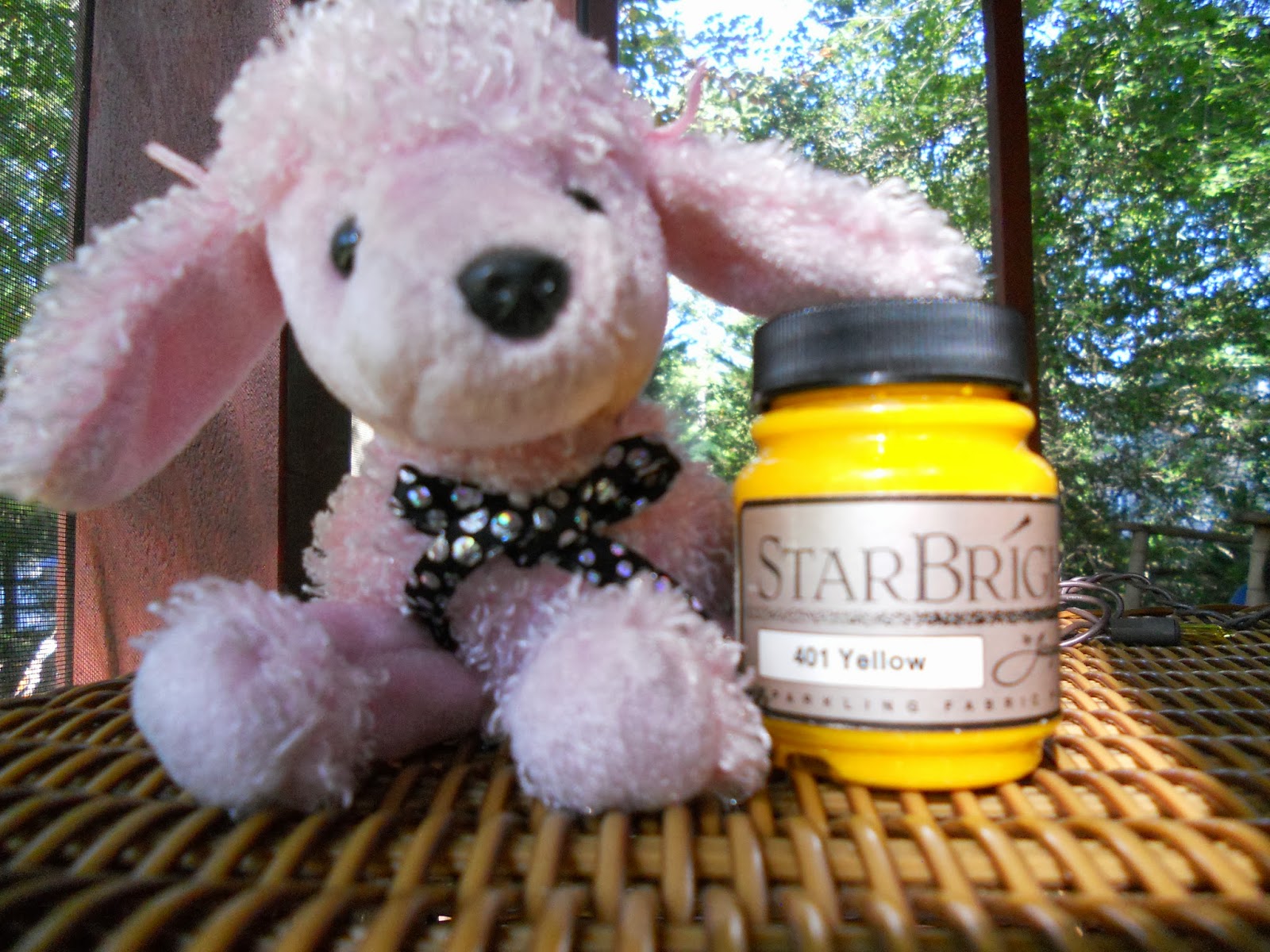 Back when I started painting on fabric instead of paper, I discovered the soft glittery detail of star Brights. Then after I was hooked, they discontinued the line. I found a source and like all good crafters, hoarded the 12 jars I found.

Then they sort of  dried up as if they knew their days were numbered. All my other textile paints, still good with half-lives of a million years in the jar.


Anyway, as artists do, I thought "what else can I do with these? Let's try them on paper!" I brushed on some of the slightly tacky paint, and oooooh the effect was glowing and sparkly. Wonderful! Except.... it's been almost 24 hours and it's still tacky.
(Around my house I could just leave it on the table and let dust coat it)
Anyway, my old inner critic is going on about how childish the whole thing looks. My NEW inner voice is saying, hey, that looks cool, it glows, and the pattern is interesting and let's just admit, it's just like me!
That's what art is supposed to be right? Fun to make, and expresses the artist. So there, critic.
LeeAnna
Posted by LA Paylor at 7:17 AM

"I sketch like a four year old but with more self judgement." Ha! So do I. But you keep doing it...and maybe I'll start again. Continue to listen to your new inner voice not the old one. It is the true one.
--Toni in Milwaukee

Your water colors and art pieces are so vivid with color! You inspire me. I wonder what's inside of me that wants to come out? Thank you Lee Anna. Cynthia in Bowie