the week ahead August 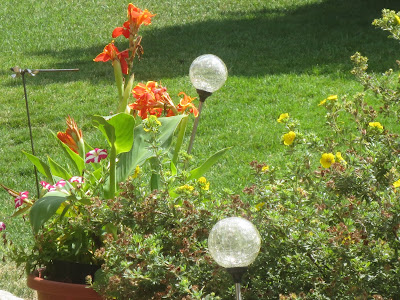 Welcome to this week's Happy Homemaker post. The week ahead in late summer in Colorado.

Weather in Aurora Colorado
It's been hot, in the high 90's sunny and harsh making me think I need to buy a parasol! But...
Saturday night, it cooled off in the evening and Sunday morning we woke to 56F, very pleasant!
By afternoon it was oppressively hot again at the craft show, and all into the evening hot hot hot.
The wind blows all day and night here. There are mosquitoes and yellow jackets and black flies swarming.  We are looking forward to a break in the heat and gentler temps.

Right now
Before the day really gets demanding, it's so pleasant to drink strong coffee with milk, to see my pup running around on morning bunny patrol, to see sun burning off the morning fog and my flowers hanging in there through the heat of summer. We're still wearing shorts and short sleeved shirts, I am trying to wear my nicer clothes even though I hope to stay home today.  I'll likely have a breakfast of cinnamon toast and peanut butter. Last week I tried having yogurt each morning, for the benefits of active cultures and put it on my steel cut oatmeal, but oatmeal makes me gain weight.I've been having vivid dreams... is that cyclical for anyone else? They leave me feeling something after I wake.

nice listening music while you read... a little prayer...
https://www.youtube.com/watch?v=QyRMD0ZXW68

To Do
Every week I vow to find a place to put things, so I can clear off horizontal surfaces and see table tops.
Some things have no home to go to.
Our allergies are flaring up, all three of us, so we'll just do what we can comfortably this week
There are the usual daily chores, cleaning, laundry, dishes, meals which we all do.
I want to draw or paint each morning, learning as I go
Hopefully my back will allow me to return to sewing, I have so much I want to make
I'd like to start a new pair of hand knitted socks this week
I'd like to try painting on fabric, using some inks this week
I am excited that this week is my monthly art quilt group meeting, so I have to gather what I've made to show my new friends, and look forward to seeing what they've been making too!

I had to admit  the neighborhood coffee group is not for me. That was hard, I had high hopes to make friends, but there are some mighty offensive people in the group that are impossible to ignore making the whole experience more of an endurance test than a pleasure. Sad. I've tried many times to steer the conversations to things we have in common, fun things we've done or could do, and it always ends up with someone ranting. Do people understand parties anymore? I've been openly attacked by two people now, and they sit at opposite ends of the table not liking each other either, so where would I sit to avoid them both?

So you'll find me at home more, trying to live a creative life, keeping in touch with friends across the globe by phone and email, reading, writing, sewing, painting, setting up playdates with Milo's friends,
and enjoying the growing friendship of a couple women here who are fun to talk to while our dogs play. I will be on the porch some, enjoying the flowers that made it through the heat. I need to sort through my lovely photos of the recent trip to the Botanic Gardens, where we saw the most magnificent water lilies. So many pretty pictures I should print and frame some.
To-Do... remember the Golden Rule... do unto others as you'd have them do unto you. Promote kindness. Give lots of honest compliments to people I encounter, just to sweeten life's moments because that can change the current of life. Small things like a kindness may have far reaching affects. Who knows? But I can do that.

I was tired of people not being polite at the Gardens last weekend, then one man accidentally reached over me at lunch, and said, "Sorry Sweetie, excuse me!" and that little kindness made a huge difference in my feelings and patience. He won't know that, but I do.

Reading
I've been reading the journals of Frances Burney which I heard about on Writer's Almanac. Fascinating account of a woman in 1700's England, who was companion to Queen Charlotte during the reign of King George. The library just informed me it's now due...
Reading the next Tea Shop series at night, listening to The ClockMaker's Daughter on cd while in the studio, which is also due... oy!

Watching
We found season 6 of the Great British Baking show on netflix! Yea! It's so wonderful, I love the bakers and what they are making! We started watching an Irish show called JOY on ACORN and it's very entertaining, quirky and humorous. Master Chef, Bachelor in Paradise, Big Brother, and Say yes to the dress are also fun to watch right now.
We get Gilmore Girls in reruns each day on UPTV so I watch that while having lunch... never tire of it. 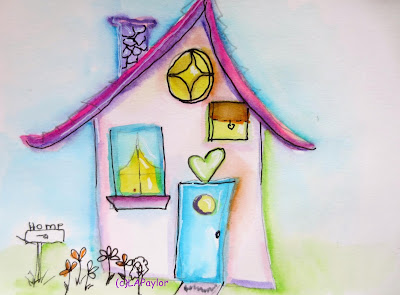 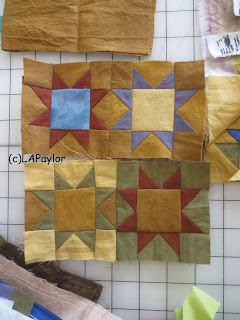 Working on paper piecing some blocks to enhance a painted fabric scene of mesa's. Painting a lot. 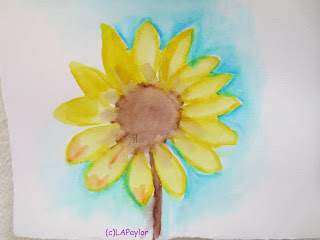 My life is mostly spent in creative efforts. I do a painting post on Fridays with my week's worth of experiments, Post here, and on Thursdays I do a list of the things I liked that week. Please join me on those days, as other people are also keeping a list of things they enjoyed that week. 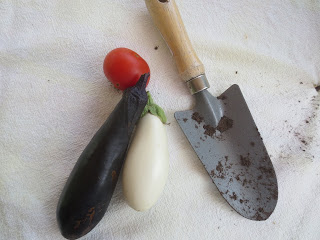 Eating
Saturday evening, we sliced up a white eggplant, a purple eggplant, a bell pepper, and a zucchini  from our garden, added garlic, onion, ground chicken, and Trader Joe's Red Thai Curry sauce. After that cooked and then simmered a bit, we added in a box of frozen brown rice.
It was so good. I think the pesticide free vegetables, used fresh from being picked, helped.

Last week we did a similar casserole but with a home made alfredo sauce and it was so good I wanted to have it every night. I have a lot of allergies, including corn (and corn starch) in all commercial alfredo sauces. It's basically cream, cheese, garlic and parsley. I had no idea it would taste so much better til DH found the recipe and made it.

We bought a sugar canteloupe, palisade peaches, and a small watermelon at Trader Joe's this weekend too, and look forward to fresh fruit this week. Our TJ's is not close, so we stock up when we go over, and it feels so good to have a full freezer and pantry, with items I can eat !

Deep Thoughts
I read this in the Writer's Almanac yesterday. I get their post marking each day with the events that came before, check it out here.
Every step toward human rights in our country has been met with mulish opposition, but so far it seems, respect and decency has overcome. I hope we can continue that.

snip
On this date in 1920, the 19th Amendment to the Constitution was ratified, giving women the right to vote. The first national constitutional amendment had been proposed in Congress in 1878, and in every Congress session after that. Finally, in 1919, it narrowly passed both houses of Congress and was sent to the states to be ratified. Most Southern states opposed the amendment, and on August 18, 1920, it all came down to Tennessee. The pro-amendment faction wore yellow roses in their lapels, and the "anti" faction wore red American Beauty roses. It was a close battle and the state legislature was tied 48 to 48. The decision came down to one vote: that of 24-year-old Harry Burn, the youngest state legislator. He had been expected to vote against it, but he had in his pocket a note from his mother, which read: "Dear Son: Hurrah, and vote for suffrage! Don't keep them in doubt. I noticed some of the speeches against. They were bitter. I have been watching to see how you stood, but have not noticed anything yet. Don't forget to be a good boy and help Mrs. Catt put the 'rat' in ratification. Your Mother." He voted in favor of the amendment.

Remember we are on earth to love one another, love starts with respect.

Thanks for reading, now... onto real life already in progress... 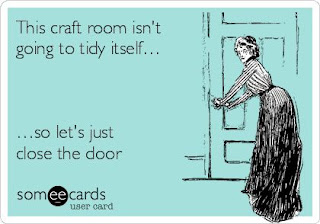