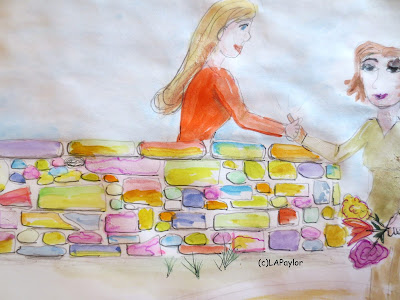 I didn't have a lot of interesting meetings this week, sorry to say.
I am in mourning as my computer died. It had been showing signs of old age (as many of us do) but soldiered along. Then one morning, it  wouldn't wake up. It seemed to die peacefully in it's sleep after upgrading it. Oh I tried the usual resuscitation techniques, and it briefly lit up only to finally leave us.

This computer was bright red, and with me for a long time. We shared so much, it brought me to writing in the modern day as the keyboard was great for my hands. I am temporarily using my husband's computer but the configuration is all wrong. I have a very difficult time using the keyboard and need to constantly correct miss hit keys, and it makes my shoulders hurt. The hope is that my husband who saved the contents the day before actually saved the pictures and info I had stored there.
Don't get me wrong, I'm glad to have one, and to keep moving but I am in serious mourning as the newer laptops all have the keypad like my husbands.
Change is not always good.

1. Gloria and her son.
I met Gloria when we first moved into the neighborhood. Her black lab and Milo love each other, and I liked Gloria from the start. She is very busy however, so we don't see each other enough. She is a breath of fresh air here in this area. For the last two weeks I've been thinking of her a lot, then she called.
I think some people are mentally connected like that.
We got together yesterday at her home, and picked up conversation like we'd just been together instead of it being 6 months. Our lives are so different but we have a grand time sharing them.
I met her 17 year old son, and he was also a bright spot. Instead of being bored and sullen, he was funny and engaging and able to converse with us.
He recently got his driver's license and an older car. I told him I remembered getting my license on my 16th birthday, wanting intensely to be independent of my parents for even an hour, but having to use their car to do it. I felt exhilarated but also frightened to drive that big car alone, like, should I be driving by myself?
He said he feels the same way!
Across the age difference, across gender, across experience, we connected in shared feelings!

2. We finally went exploring a bit last weekend and drove up to the capitol of Wyoming, Cheyenne.

It was like turning back time, and driving into a Western movie. I am sorry I can't rave about it, because it felt dead like some towns that used to thrive but fell on hard times. The brochure I was reading in the car, said "shopping galore!" and we found a downtown full of closed businesses, with floating trash and cigarette butts.
Apparently the town started in 1867 with the coming of a railroad stop, flashed to life with the cattle business, then 20 years later that fell apart with a blizzard that killed the cattle. All the mansions built with momentary riches fell into disrepair, and the townsfolk tore them down. The lovely historic tour brochure with it's many dots on streets and descriptions, were of places no longer there.

We started our trek at the train station, where there was a rally for women's rights. It was crowded with men and women, in the  nicely restored building. I  thanked the organizers for keeping the dream of equal rights alive. As I looked at a table of pamphlets a young man who might have been developmentally delayed asked loudly, "were you just on stage?
I replied no and smiled.
He snorted with a laugh, and said, well you LOOK like someone who was!A short connection but in that moment I felt something... I don't know what. Maybe I wish I'd been on stage.

The clerk in the gift shop for the station said she grew up in Cheyenne. She looked to be maybe 60-ish, wore very tight jeans, a western shirt, high stilletto heals, and a LOT of make up for 11 AM. She was friendly and talkative about her city when I asked what to see there, "You should come during Western days" she raved!

She said a couple of her many siblings moved away but most of them still lived here like she does, and she LOVES living here.
after looking around a bit, we wanted to leave and drive the extra hour to Laramie as University towns usually have lots to see, but the road was closed due to snow and high winds.

The art dealer said winter was awful here. His shop was in the old doctor's house and office, for the railroad workers. While I was there it made a lot of noise startling me. He said it was built by drunken railroad workers so...
He had bronze statues out front that cost $120,000 ! I wondered who there would purchase such an expensive statue. Twice the cost of my first house.

We spent the day there, walking around, then went to the botanic gardens for a bit, and to a quilt store and I read up on it's history on the two hour drive home.The town was wild and dangerous when it began and still is one of the most dangerous places to live in the area.

3. the third interaction was with Onyx, Gloria's lab. I took her some rabbit treats as she injured her ACL and is not allowed to run. She is usually a bit wary of people, but she welcomed me and the bag of treats into her home.
She shares the house with 4 cats, so I gave a treat to one cat who sniffed it. "Sniff..... Sniff.... Sniffsniffsniffsniffsniffsniff...." while Onyx watched. Suddenly mid-sniff, Onyx walked over and ate it. I laughed. Two other cats playfully took turns punching each other. I was kind of amazed that this household with 4 cats, one lab and some fish all lived in harmony.