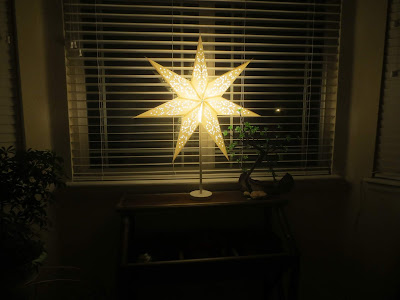 1. Milo here: I had a nice connection this week! Mama and I were having another uneventful walk, and I was sniffing every bush and trunk for my "pee mail" when I heard Mama say, look!
That always means something interesting is somewhere nearby.
I turned and there was the growly little white car I bark at! (mail truck) and...
the guy got out and walked by and put something at another house, then smiled at me on his way to the growly car. He stopped and I looked up up up (he's tall) and he smiled at me and reached out his hand. I looked and looked, then danced around, hopping from one place to another, laughing and touching his hand, then darting away. Game was on! Don't let the guy touch you while you touch him with your nose! He was fun but had to go too soon. 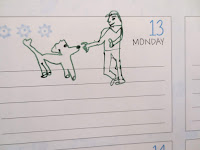 2. When we moved into this house, another family 4 houses down moved in their house the same day. They invited us over for 4th of July party, and we really liked them. When we ran into her over the holidays she said a couple of neighbors next to her were meeting up at the Tavern and would we like to come? I said yes! She texted us the time and day.
when the evening came, dark and very cold, we questioned going. I said, lets go for a while at least.
There were four couples and all very nice and fun, well traveled and kind. It felt very nice to be included and we all decided the next outing of our little group should be comedy  night.
We long to be part of a group like this, so fingers crossed it will continue. 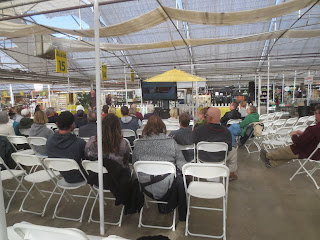 3. This weekend we took it easy, starting with a garden lecture on xeriscaping. Milo loves going here, so he was highly disappointed when we just sat and stared at a man talking.
Milo: what the fizzy happened to my peeps? Usually they don't just sit and stare except at night at the "talky-talk" (TV) I entertained myself with a little boy, then chewed the lid off the water bottle, then had to actually jump up on Mama to walk around and sniff stuff. I wanted to look through the dog stuff, and found a great ball with the loudest speaker ever! Funny though, when I started squeaking it, all the people turned to see me which was great as Mama rushed me out of the area and we walked around which was much more fun than staring.

LeeAnna here, Milo was a magnet for people that day. One little boy who looked like he much preferred running around with Milo, reached for him, smiling a tentative smile, turning into a grin as Milo leaned on him. I could tell the boy really wanted a dog, but his dad said, "be still" He longingly looked at Milo the rest of the time, petting him when Milo came close. I was reminded that people will open up to dogs even when other people frighten them. Another woman came up with a very old teensy poodle, and said her 5 year old standard would have caused a scene so he was left home. but she loved him.

4. the last meeting really affected me....we were having lunch at Panera and Milo ignored his food in favor of getting a plate of sandwiches like ours. A couple walked by and stopped,  staring at him. I am training Milo to reach out to nice people by sitting and shaking paws. He went over and leaned on the woman, who melted into smiles.
Turns out, they lost their very old lasso apso a year ago and they were just emerging from mourning. We all related the loss and the need to love again. She and I were so sympatico, and conversation flowed like honey between the four of us, punctuated by Milo's antics. She is at that stage where you begin opening to the possibility of  risking loving again. I can't explain all the important topics we covered, from training a dog to the state of the world today, but it was like we knew each other.
Ever met someone who felt like that?
When they reluctantly decided to go on and let us finish lunch, she asked to hug me.
Oh!
Yes, yes of course.
When they thanked me for talking with them, I said "of course! That's what life is, these connections. The rest is just spackle" and both husband and wife grinned and agreed.
Of course I didn't have my cards on me, so I told her of my blog, as a way of continuing the contact. I hope she does contact me sometime. If not, she and her husband enriched our lives by just this meeting with them.
Posted by LA Paylor at 7:52 AM