the (red, white and ) Blues 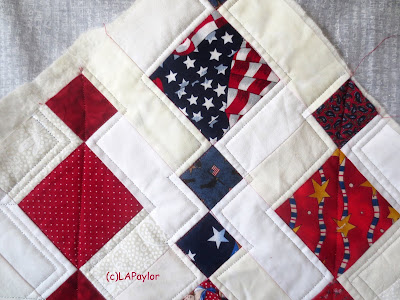 It's the last week of the rainbow scrap challenge for June, and the color to use was darker blue. Perfect to combine my chandelier blocks (from stripin' therapy) in Red White and Blue. 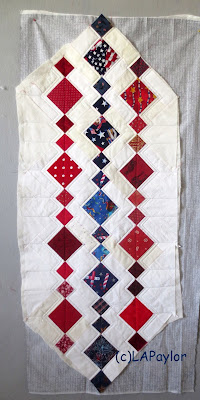 This week I cut out blues from my patriotic stash to use on a table runner.

It was all good til the quilting...
I did a lot of straight line quilting with silver metallic thread (sulky) that didn't even show as sparkly.


Then when I decided to do free motion stars around the outside, it all went south.

No problem, I chatted with a friend while I ripped it all out, oy vey!


Went back and did a much preferred quilting of straight lines going toward the outside. Nice! Changed to haloishimmer thread that really looks sparkly and silver! Better!


Then I realized I could have used the backing for the edge treatment... and will even though I laid out the whole thing near the edge because I originally had a different binding planned. It's all workable though! 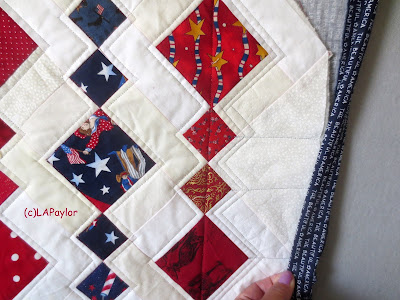 I just got a cool stars stencil at the quilt expo, so maybe some gold stars scattered around the white!
linking to

can I get a whoop whoop Fridays
design wall Mondays at smallquiltsanddollquilts
lovelaughquilt.mondays
blue mondays
oh Scrap Sundays
all seasons
scrap happy Saturdays
Posted by LA Paylor at 9:29 AM

Email ThisBlogThis!Share to TwitterShare to FacebookShare to Pinterest
Labels: my art, rsc