Flamingo love story and sketch of the day 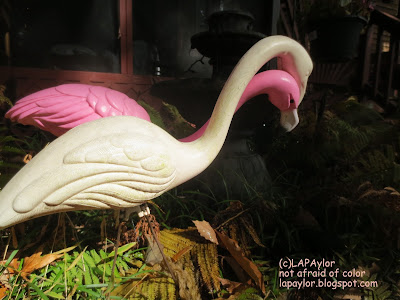 In honor of Valentine's Day
This is a sketch of the day from October 2015. As I sat quietly thinking great thoughts (smile) I decided to sketch the two flamingos that had fallen together near the fountain . 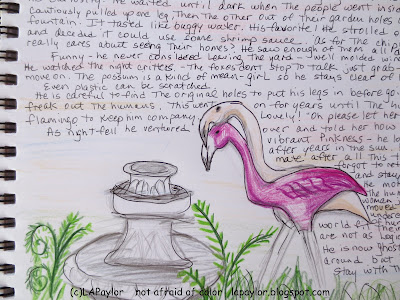 As I sketched, their story came to me and I wrote it down. Want to read it? The original story was written right next to the sketch and I love the way the words surround the image becoming part of the whole.

A love story:
...to be honest, plastic flamingo yard ornaments are not rare.
But once upon a time, there was one flamingo, a Not-your-typical-flamingo.

Quiet, as birds go, this one was always thinking, "What if..." What if, come evening I could take a walkabout?"

He thought about all the things that interested him during the day such as what does the bird feeder hold? Where do chipmunks live? What does fountain water taste like?"

As dusk deepened, he stretched his long legs in anticipation of fulfilling his curiosity. He waited until dark when the people went inside their home, cautiously pulling up one leg, then the other. Out of their garden holes, and he walked to the fountain... 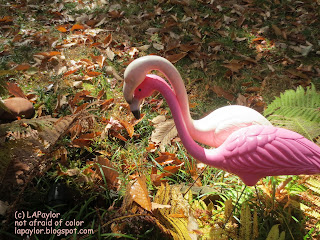 It tasted like buggy-water.
Yum.
The suet cake left for birds could use some shrimp sauce, he thought. As for the chipmunks, well, who really cares, he sees enough of them all day.
Funny, he never considers leaving the yard. He knows his molded wings will not carry him in flight.

He watched the night critters. The foxes do not stop to chat, as they are about the business of grabbing a quick bite and moving on. The possum is a mean girl so he steers clear of her and her claws that could scratch plastic.

He is careful to find the original holes to put his legs in before giving in to sleep. No need to freak out the humans. These nightly explorations went on for years until the humans got another flamingo to keep him company.

Just when you despair of finding love, it shows up in your own back yard! Lovely!

As night fell, he ventured over and told her how much he admired her vibrant pinkness, his having faded over the years. How good to find a mate after all this time.

One night he forgot to return to the original holes in the dirt, so comfortable was the snuggle with his new friend. He momentarily panicked when he saw the humans, but one said, "Hmph! Must have moved him and forgot!"

Never underestimate the ability of humans to rationalize facts to fit their existing beliefs. They are not as logical as we are he thought.

He is still able to move around but chooses to stay with the love of his life.

Email ThisBlogThis!Share to TwitterShare to FacebookShare to Pinterest
Labels: sketching like a four year old, writing for pleasure