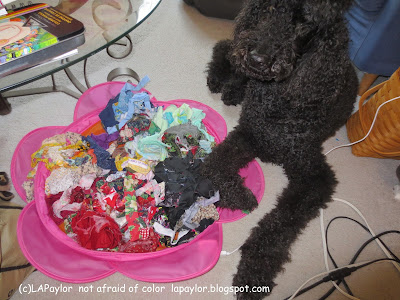 Cole here, to discuss an important topic.
"What to do when your people have obsessions"

Sure, they call it hobbies, but a hobby is ball chasing, squirrel watching, removing the insides from stuffies, stuff like that.

My momma is obsessed with fabric. (You'd think she'd dress better, but I digress)
Even little throw-away bits like this. People give them to her, she washes them in a bag and sorts them into little bins so that she can disappear for hours while I sit doing nothing.

I decided to give the scraps a real sniff when she was in the studio, just to see what the fuss was all about.
Shrug. Smelled like soap, blech. 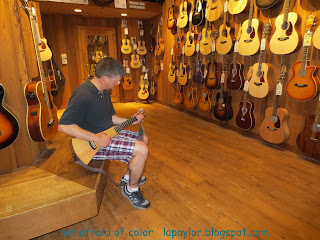 Daddy is obsessed with his guitar. This is the take-along guitar.
He and I usually entertain ourselves when we are taken along to a quilting store. I don't touch it. First of all, my nails are long but I can't get a good grip on the thing. 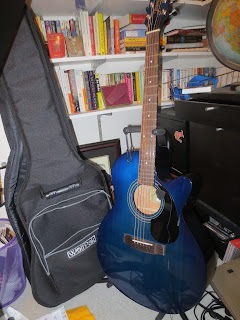 Usually when Dad goes up to practice, I go up to protect him.
I lay just outside his cave, and watch.

When I feel he's had enough, I nose him.
Dogs know this technique.
Put a cold wet nose directly under an arm and jerk your head up, causing their arm to rise up abruptly and getting their attention. Much more effective than a bark.

When Momma is in the studio I pace around inside the door.  I have had to resort to the "nose technique" but she isn't nearly as nice about it as Daddy.

"Cole QUIT!"
(To her credit, if I do that during a vacuuming session she brings me deep into her cave and closes the door to keep the noisy thing out)

The thing is, these hobbies keep them busy and when they're busy they are NOT grooming  me.

My mom is obsessed with taking my picture. I wish she would find a new hobby!

Thank you for your nice comment on our review. We wanted to try something different. So glad you liked it!

McGee suggests that Cole eat about half of those miraculous pieces of fabric. he swears they are most tasty!

Arnie and Bailey say that the BEST time is when I take a block or quilt outside to take pictures. Yay - outside! (Now, if only we could combine quilting and walkies!)

Cole, you look so cute next to all those bright fabrics! And, yes, Rita does know that nose-poke technique! She tries it on the momma when the momma's been sitting, staring at the box on top of the desk for too long!

Sounds "Ruff" Cole ! Hang in there with all of their hobbies

Thats so funny, Wilbur does the nose thing to me too usually when I have a cup of tea in my hands!

Looks to me like your peeps are pretty talented - you are a very lucky kitty> You will have to learn how to help them more - get in the middle of what they are doing - kitty style. Demand that they let you help.

Cole, Zu Zu asks why you are not grabbing mouthfuls of that luscious fabric. You must shake it until you're sure it's dead then throw it around the house. Then look for any of that filler stuff she uses. I think she calls it batting so be sure to chew and shake that also to make sure all the bats are dead.

I love the Cole stories!

My woffie brother comes with his wet cold nose when he whant´s attention too :)

The only hobby my dogs endorse is my embroidery, especially if it's a big piece. That way, they can crawl underneath it while I am working on it. But they hate dad's guitar. And they hate it when anyone is reading. Picky dogs.

Jean from Welcome to the Menagerie

great way to entertain while waiting at the store! Hope he plays well and it doesn't hurt your ears, Cole. Thank's for joining in the Pet Parade! ~RascalandRocco

So you're the Featured Favorite on the Pet Parade this week. Sounds like you have it made with your family.

I'm visiting from the Pet Parade... That's a good trick that you do with your nose to get attention. I'm happy cats can't do it. But they do have other effective methods!
Maggie

Aw yes, the poodle nose under the arm response. We know THAT one well. Just know your mom and dad love you very much, Cole but needs time to keep that love well honed & special for you. ღ