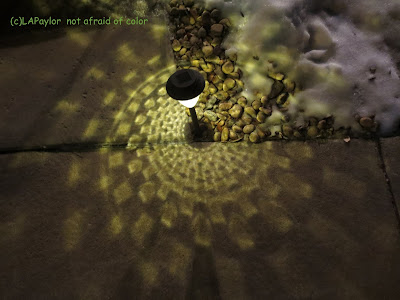 Welcome to this week's story from Sunday's Whirligig prompt, the words to use are:

the image I chose today is a study of light and shadow. When we think of shadows we often picture bright daylight. When I happened onto this scene on our nightly walk, I realized shadow comes as the guest of light, any kind of light natural or created. I love the pattern of light and shadow, and realized beauty comes with the mix of light and dark.
I also liked that the sidewalks are three quarters of the image, and rocks complete the square. I liked the texture change, a circle made of squares, and the visual texture of light on both backgrounds.

Now for the story...
Luck and Life
Someone on the outside looking in might think the scene looked a bit lonely... but these two were quite content and even happy today.


The small feast was nearly ready, the table was set with the fine china and crystal as if they had the queen coming to dinner. Candles were in the crystal holders and their wee flames were dancing to the swing music playing softly in the background.  John took Daisy by the hand, and pulled her into an embrace.


They had danced like this for the last 51 years, him holding her hand near his heart, his other wrapped around the back of her shoulders, as if it was made to go there. Indeed after so many years it probably left a small indentation there! She would nestle in and lay her head on his chest as he was so much taller than she. At first they just swayed a bit, but then memory kicked in and they moved around the kitchen turning and dipping, smiling then laughing.


"remember this song from the dance we attended in '66? " she asked.


"nope, I can't remember that far back" he chuckled, " but I remember how you twinkled at me the first time we met"


"I did not! You pursued me, begging me to go out with you" she replied. It was a familiar argument

"well then, it just showed my good taste at a young age" he said looking down into to her slightly wrinkled face.

"We've been lucky this year" she said quietly, as he tucked a little strand of her hair behind her ears. She loved that gesture, never tired of it. When he did that she felt cared for and protected. As if they could avoid the aging process if they just continued to dance. Wasn't it just 7 days ago, they left the hospital after his heart "event"


Ha! Event! as if it was something to celebrate! Of course, it kind of was, the fact that they left the hospital together. The event!


"let's toast to the event!" she suggested, reaching for the two glasses of red wine on the counter. He took his and said, "to leaving the hospital. To a fine dinner! To the prettiest woman I ever met! To many more moments like this!" and they sipped. She wondered if they should have juice instead, but the doctor said red wine was okay.


Their lives had not been a storybook romance. No lie, it had been very challenging at times to keep going.  People wish you luck, but luck runs the continuum from bad to good with all the in betweens. What is luck anyway... is luck just... life with it's daily challenges and gifts? How much control does anyone really have over circumstances. Do we just try to make ourselves feel more comfortable thinking we can ward off evil or make good things happen if we just plan enough? Is life mostly in the way we handle the random "events" that come up?


They never had children, or an extended family really, just their wee family of two, and when luck was with them a dog to share the days. It wasn't always easy to listen to other people discuss belonging to large families where they were wanted.  After so many years they now accepted that this was what was. In dark moments she wondered was this all there was, in lighter times she reveled in the fact that they shared something close in this life.


She turned back to the stove to get the plate of turkey for their table. He dimmed the lights, and for just a moment they stood still. The sound of music filled the room, drifting between and around them to fill the spaces. She stole a side glance at his profile, and thought for a moment of the worry of the last few days and thanked God, and him, for this moment. This time luck was good, this time their little family survived.

She was aware of what they had, again, and chose not to think of anything else.


He puled out her chair, and swept his arm across it in invitation.


"Madam?"  she giggled, still 20 inside. Placing the turkey on the table, she turned to him and he stepped around the chair and kissed her. He felt 25 inside and the event scared him too, but they were here. There was love still. Nothing but this moment mattered really.

Linking to:
Shadow Sunday
http://sundayswhirligig.blogspot.com/
Posted by LA Paylor at 8:03 AM