what do you see in this? Abstracts and experiments

Some things I tried this week...
1. new ways to sketch from my online workshop
2. markers on printed black and cream fabric
3. quilting my abstract mountain piece
4. painting a background, or landscape


All were influenced by what I see around me daily, the scenes, the colors the way the air feels etc.
All involved seeing the world with fresh perspective, and looking into something abstract to find images I could relate to.

I'm so excited about all four, and there are lots of pictures, so I plan to write a four part series, with posts on each process. Stay tuned my friends, share the fun with me! 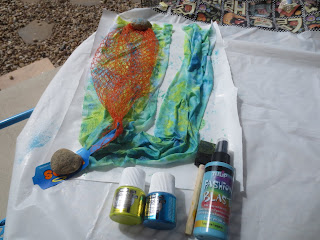 During a heat wave on Tuesday, I found myself wanting to paint some fabric. I tore a large quarter yard off of some PFD white fabric, got a piece of freezer paper and some SETA-Shimmer paints to do a landscape. I also used dynaflow paint, and some spritzer paint. All made for use with textiles, all in an acrylic base but behave like watercolors on paper. This time I used a sponge brush not a sponge.

I went outside to the patio, as I wanted to try sun printing with the oranges mesh bag for texture on a background piece.

I balled up the fabric after wetting it totally, squeezed it out, spread it out long ways on the table outside, and started by spritzing with turquoise paint a friend gave me. Then daubed on seta shimmer in canary, and electric blue (shimmers have a lot of pigment and a delicious sparkle). I chose not to dilute them further, just to see how much they would blend on really wet fabric.

The pigment did not want to travel like usual on the wet fabric. I've painted so much on all media but never had it mostly sit still where I drop it. 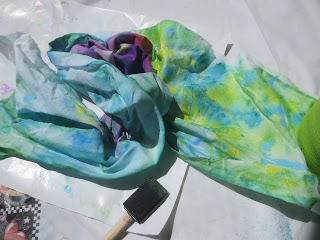 I spritzed it again, and put the netting from oranges on to see if it would sun print a texture.
Nope, no traveling or mixing of colors no sun printing. I spritzed again, and dragged the pointed edge of the foam brush through the colors to lead the colors in blending.

Hmph! So I stretched it out, spritzed the still white areas, and using small bottles of dynaflow dropped purple, pink, crimson on that hoping for a sunset look.The dynaflow did start to migrate. As the paint moved and I watched, I hoped for a sunset kind of feel to the piece but it looked more and more like red cliffs of a mountain against new green of spring. 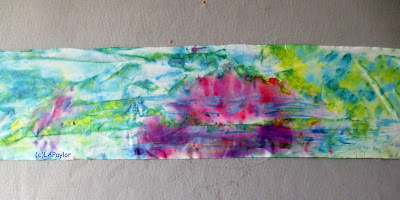 That's okay too!
So the lesson here was to see what emerged, not direct the show. Okay. I continued to watch the pigment move blend, connect and to imagine what scene was developing. 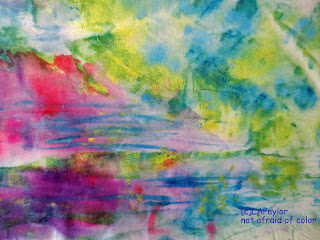 This became a theme for the week's experiments!
I didn't love the way it was drying so quickly, and like many projects, the self-censor began to grouse in my mind, "another waste of materials!" and "this just looks like nothing!" Know that voice? 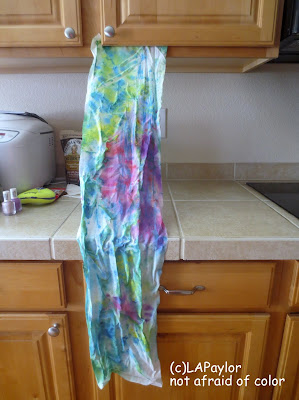 However, I also know it ain't over til it's been overworked! I hung it up vertically to totally dry while I did other things. I looked at it as I put away dishes, came and went, did other things. I realized I might see something totally different that I aimed for. I realized I could stamp spirals over the pink areas and they would be tall standing flowers in front of a mountain. They even engaged the border which I forget to do.
It's the difference in a planned painting, where the scene is in the middle of the fabric, intact, or part of it is cut off so your mind's eye has to know the rest of the flower is still there, but not in the picture. Cropping in a way, although this was made like that. Cropping an image lends interest, as the viewer must engage with their vision to complete the image. 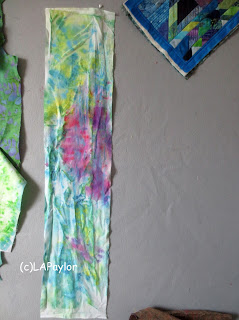 So I now saw a foreground tall blossomed set of flowers, mountains in the background... I could stencil little incomplete flowers in pale purple, 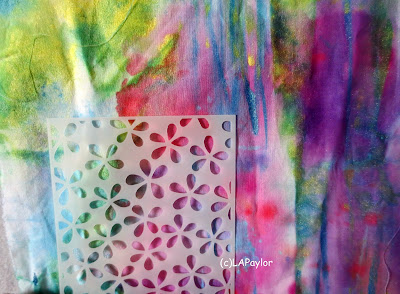 I could stamp spirals, all lending to a texture that felt like blossoms. I could stitch in the blossoms with thread. I could use markers or colored pencils. What if a tiny bird hid under the tall flowers?
Like Michangelo said, "I am always learning"
the point is not to paint something to sell, the point is to look at the world in a new way.

So I'm going to turn it all around, consider my next steps. I could crop it into four smaller paintings or most likely will do something to look like the foreground flowers. I like the idea of stenciling some petal shapes, then stamping spirals over that.


I think the best thing is to learn by doing. Try it. Like dancing, turn off the censor within, and just move. Like listening to another language being sung, just let the sound carry you along undisturbed by actual words. Then turn it around and look at it a new way, you will be surprised at what you see.

It's exciting!
(remember I'll be doing four posts in this series, next one will be on Sunday)

Linking to:
off the wall Fridays
can I get a whoop whoop Fridays
https://paintpartyfriday.blogspot.com/
Posted by LA Paylor at 10:14 AM