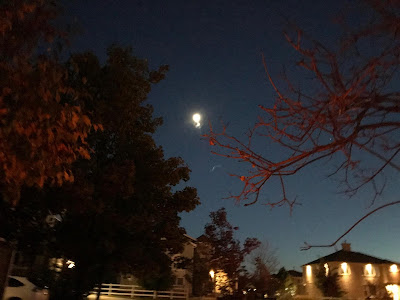 
Memories were dancing around her head like little fireflies... she heard the music in her heart if not her ears. How many times had she waltzed with Jim at the town dance? So many that she knew where he was going before he did, and she followed him as smoothly as day follows night.


People used to say they looked like they were in a movie.


She stopped under the big elm tree, in it's shade, to catch her breath. Truth be told she had a little less energy these days in her real body, but her mind's body longed to dance again. One's body never forgets what it feels like to come into the arms of a strong man, be carried along with the tune, just feel the movement to the music.


Closing her eyes, June felt like she was swaying with Jim again, Jim and June.... the music. She realized she was swaying, what must people think, seeing her from a distance. "Miss June's having a fit out there!"


She opened her eyes, and saw the day as it was but she longed to see Jim instead, looking down at her in his arms.


A squirrel shoved past her on his way to the tree, a bird chirped above her head, a child cried over near the swing sets in the park. She was still alive and so was Jim although his spirit had moved back to Heaven. June still went to town dances, and danced with men who would be happy to become her new partner. She knew it was okay to find a partner to spend time with here on earth, but somehow she just wasn't ready.


Deep breath... she pondered deep thoughts this evening, about how life just goes on. The spirit moves on after the body is worn out, and other people continue on as they must, with the next breath, eating, reading, brushing one's hair, dancing with a new partner. Amazed to feel happy again eventually because happiness is part of life. Surprised when tears fall unexpectedly when one remembers the glee of finding one's mate and knowing they want to spend their life dancing with you.


Drink it all in, all the sensations when they come, don't miss any for thinking of what's gone.

She was open to living life fully.
This was her life and to do any less than experience it would be wrong.

A ghost of a smile grew on her face, as she smelled a hint of jasmine on the breeze. It was lovely, and she was still June, and there was a dance tonight in the pavilion with fairy lights up in the rafters and a live band.She would waltz again.
Posted by LA Paylor at 8:10 AM