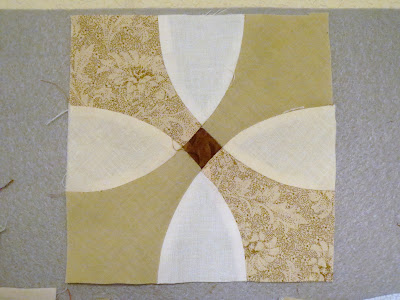 So I read my friend Kelly's blog post on flowering snowballs... (her blog ishttp://pinkadotquilts)
and I wanted to try making them. After all, we've had the snow... 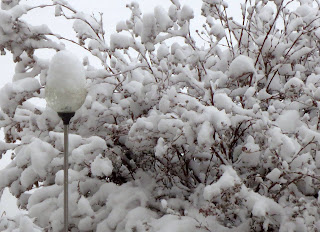 and I'm almost finished with the cattail quilt top.
I went to bitsofeverything blog for the free pattern... but...something funny happened along the way from pattern to printer and it didn't really work well.
See block above, sewn with scant quarter seams and came out 1/4" too small all over.
I tried enlarging the pattern on my printer and it got worse... 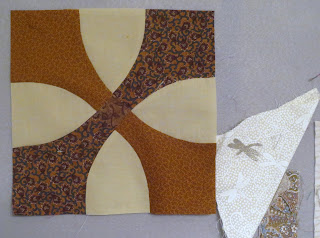 I cut it into a square and like it bigger, this is around 9"
I contacted Kelly who told me she ordered acrylic templates through .quilttemplates.com
so I ordered a set at the smallest, 8" finished... until then I couldn't stop, love sewing curves... so I made another one but reversed the color placement... wondering why I'm working with brown and beige? The scraps are out for the cattail piece... 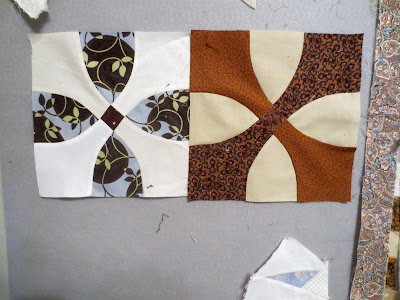 The flowering snowball block calls for the center square to be in the corner colors, but on the opposite one, I tried using brown, it's different and kind of cute but... 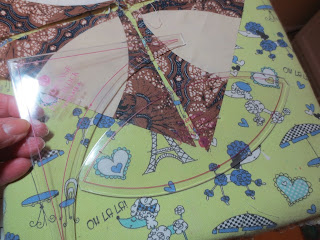 I got a magazine for Christmas with templates in it for the orange peel block. I thought, hey... that's a similar shape, can I make the block, 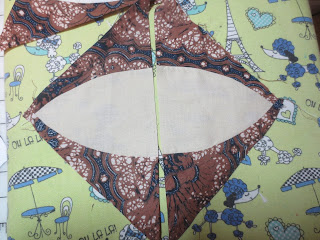 cut it in half, and sew them together to get the flowering snowball??? 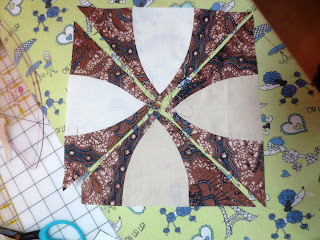 well, the short answer is no. It made a mess and didn't have the block in the center bridging the two sides, and it came together in a hot mess distorted. I pressed it mightily and added an applique turned edge square in the center to cover my sins... 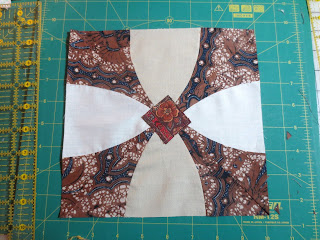 but I wouldn't make it again. It may have it's place but I want a straightforward block to enjoy not have to fudge it.
I returned to the smaller paper templates and made two with yellow scraps, and they are small but cute, at 6.25 unfinished blocks 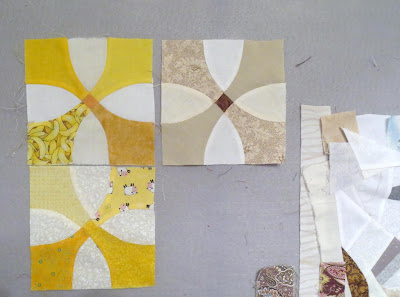 I really like the cattail piece but am reluctant to show it now that it's nearing it's final size... there are rules about sharing a piece online, if you want to compete with them in shows like Houston's.

My word for the year is explore, so I had an idea that using a different template would work and went to the studio to try it. It's just wasted fabric, they'll make more. I learned a new to me block construction, learned what I like from it (a way to use lots of scraps, and a great movement in the finished quilt) (and fun to make) and what won't work.
Sometimes that's enough for one afternoon, no?

Next up on the wall...Valentine's quilt!

linking to these parties
Esther's blog Wednesdays
Midweek makers wednesdays
Free motion by the River Tuesdays
https://stitchallthethings.com/ to do Tuesday
lovelaughquilt.mondays
oh Scrap Sundays
http://superscrappy.blogspot.com/
off the wall Fridays
can I get a whoop whoop Fridays