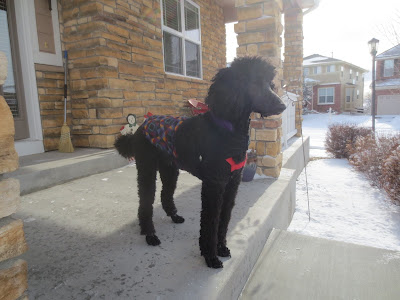 I've decided Milo's role is that of

Cole-buddy was the policeman. He hated conflict, he maintained order in every situation. If his playmate ran through my flower garden and I yelled get out of the garden, he turned to look at me, saw the source of the conflict, and ran over to nip at heels til the offender had left the area.

Milo is the Informer. He would loudly bark to alert us to the garden trampler but would not go over to enforce the law. He's a communicator. Like the commercial on TV he just lets you know there's a problem, he doesn't solve the problem.

If you're an informer, then living around other people is a non stop job.
He must be constantly on the alert to a neighbor leaving their house to get in their car, or a cat in the yard, a dog walking by the fence. If he can see it, he's letting us know he can see it. It's up to us what to do about it, that's not his job.

He is also not conflicted about his announcements. He does not defer to our corrections to use an inside voice or be quiet. He knows best. It's his job, and if our puny human ears can't handle the truth then it's on us. He informs. The informer.

Once he's let us know there is something suspect within view or earshot, then he comes back to stand by our chairs, to touch base and let us know he's here. In case we need back up in handling the issue of a dog walker, or a squirrel. Yep, he's right there to help, mostly by emotional support.

He's more of a bark and run type of fellow. 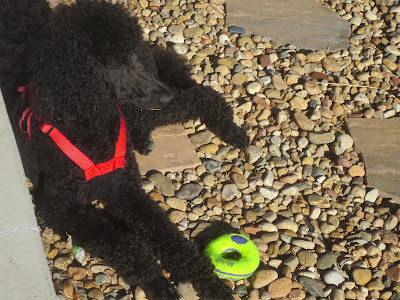 He takes his job very seriously and is on alert all waking moments. Ready with a ruff! or a Bark... BARK... BARKBARKBARKBARK!
It must be exhausting, since there is no police-type here now to follow up his alerts. He has to rely on our feeble efforts to protect the home. He's on full throttle all the live-long day and at night, falls asleep hard. When he goes out, he's out. There's no waking him.
"off duty" "leave a message" "let sleeping dogs lie" 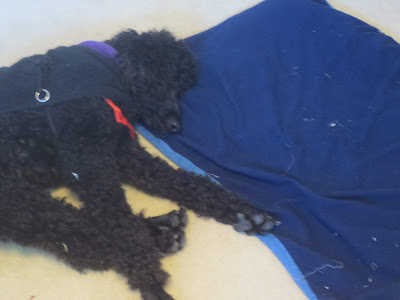 He sleeps as hard as he runs during the day. You can shove him over in the bed, but it's a slow inch by inch of ground. After you wedge him over, and slide your own legs in bed, a dog arm reaches over your leg to pin you in place. Until he rolls over onto his own back, 4 legs akimbo, in complete trust that his work is done for that day.

Email ThisBlogThis!Share to TwitterShare to FacebookShare to Pinterest
Labels: The Misadventures of Milo