Welcome to my Happy Homemaker post!
It's February 25,2019. Sounds like the future doesn't it? The future is just a string of todays tho...

When I was a young girl I went to Disney World a lot, and loved the carousel of Progress, with it's peek into the future. As time went by it looked like a crazy look because we passed their vision. I fondly remember going to the NY World's Fair when I was about 8 too... that carousel was there and there were so many magical things to see!

Now I live in Colorado, and right now I am just barely coping with the weather

Weather in Aurora Colorado
Friday the forecasters said 1-3" of snow... but we got a blizzard. About 9" where we are, and what a mess. They don't plow except for major roads, people drive on 8" and pack it down, the sun turns it into ice that stays around for a month at least. Fun fun fun. This time our neighbor ran his snowblower all the way down the sidewalk and it was a wonderful gift to us all! Way to do something nice with a big effect!

I like cold weather... I do not like uncleared roads and sidewalks that cause us all to slip and get hurt.

Wearing
I seem to be using up twice the clothes these days, always cuddle duds long underwear, plus outer layers of something soft, wool socks. Makes for twice the laundry each week. Socks require special consideration, because I see them all day. We don't wear shoes in the house. Love to peek down and catch some stripes!
Wearing boots to walk instead of supportive sneakers when I do leave the house. Makes going for a walk a bit harder.
To Do
I've been trying to do laundry on Sundays so DH can start the week with clothes for work. We have a lot of clothes for some reason, but don't you notice you use the same ones most of the time?
This week I want to do some sorting and box culling. I've put it off long enough.
I absolutely must make time to go to the PO and mail things to friends I've been holding a long time!
Must go pick up on hold books at library
Do my online quilt challenge. More later

Reading and Listening to books on disc
I am so enjoying this librarian series (by Vicki Delaney) at night!!! And finally, a great book on tape!
Gotcha! by Fern Michels.
The sisterhood/vigilantes ride again. I have discarded three books on disc recently as boring, but this one is lots of fun! I read many of the others in this series where older women take on cases that seem to be  impossible to handle in court. It's rogue but really intriguing. And strong women... the way is is folks!

Watching
Survivor is back. I just checked out the DVD set of latest Outlander available finally at our library.
Series I like, This is Us, New Amsterdam, Good Doctor, Real Housewives of Beverly Hills, Million little Things. I watched When calls the Heart last night, and realized I missed all of last season from the moving confusion, and that her Mountie had died... took some fun out of the series for me.

Going Places
Well the weather has messed up plans for us for months. We seem to get storms here every weekend. The last one was such a mess. The city park in our neighborhood got one sidewalk plowed, yea! but the wind that dang Prairie wind that blows non stop here, blew the top two inches back onto the sidewalk so even that's ice now. We wanted to go to the Dior Exhibit in Denver, so hopefully next weekend. 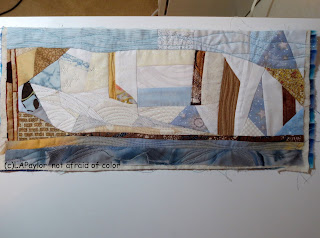 Making
I finished quilting the little winter scene, from scraps off the cattail piece. I learned a lot stitching on it, how the threads will look and how I want the cattail piece to be quilted with swirls and lines creating hills. I free motion quilted in snow flakes falling, and air swirls.

I was challenged by my online group QuiltArt and one member in particular who gave the prompt open any magazine to page 20 and use that as inspiration. 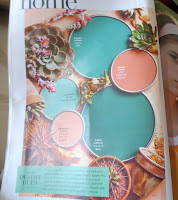 I opened the home magazine on the table and found paint colors of teal, forest green, terracotta.
Yea! Perfect for an abstract flamingo piece! I was happy that one person on the list particularly mentioned me by name, encouraging me to enter the challenge! She said maybe a poodle could inspire me, lol!

It's just that personal invitation that spurs us sometimes to keep going, to try something. A small gesture or word. We never know how our words will effect someone... I talked to the receptionist out the chiropractor's office about a word of the year, in passing. Well she thought about my passing comment, chose a word for the first time, and is excited about her experiences so far. I had no idea she would take my comment to heart! 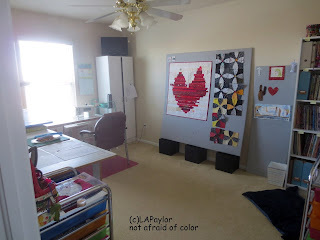 I also am enjoying being in my small studio these days. I didn't expect the smaller space to feel as good as the MD larger space but it's becoming my nest. It needs some serious lighting changes tho. 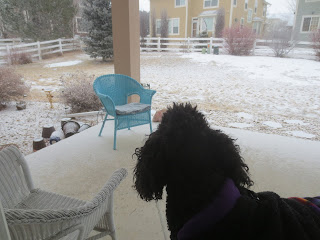 Lessons learned
We met a yellow lab playing in the park last week. It's a big boy, and his person said he was very friendly. For the first time ever, Milo snapped at his nose. It took us all by surprise! Milo the happy playful one? Growling, then snap! The lab backed right up so no problems. We thought, what the fizzy? Well we needed to trust Milo's judgement, and you can't judge a lab by the cover. Milo was nicer to him when we met again this weekend but I noticed the lab still was intact.. The owner said he's always nice, but sometimes tries to hump males at the dog park.
Ah ha! Milo knew and was sending out a warning shot over the bow.
The lesson for me was, danger isn't always obvious, and trust the dog without blaming him in these situations. I was slightly embarrassed with his reaction instead of trusting it.

Also, when the latest blizzard started, Milo and I had just come downstairs to the kitchen. He laid down to look out 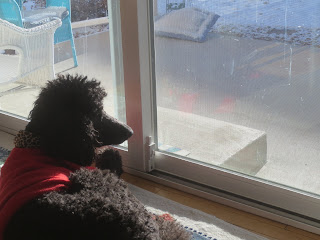 and suddenly jumped up and woofed! He noticed the snow. I opened the slider, he bolted out to bark at someone I figured, but no, he ran to his favorite toy in the yard, picked it up, ran back inside and placed it on the carpet before taking up his place again.  So smart.

Eating
my friend said fresh ginger helps the digestive tract fight bad bugs, so I hope to make some soup with ginger today. There is apparently a strain of antibiotic resistent bacteria causing UTI's out there.

Well, that's the report on chez LeeAnna for this week... here's to a happy week to all! 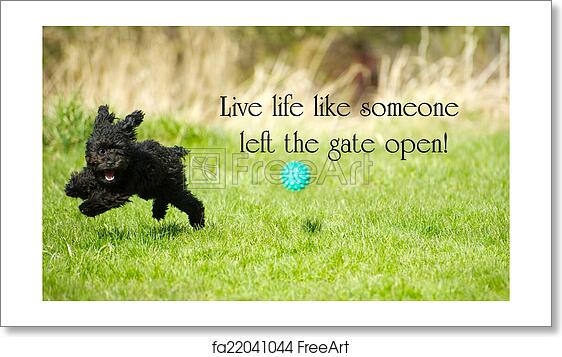