We met Milo when he was 5 weeks old. He was just the tiny little dervish and ran around peeing on the breeder's floor. 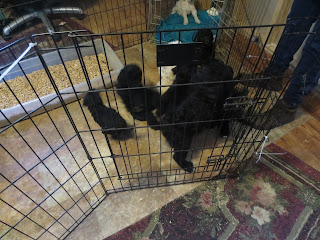 I knew he was for me! We brought him home at 8 weeks and our lives have never been the same...
He's still a dervish and still peed on my friend Mary's Christmas tree in December! (so sorry!) He still pees on his front legs because he is so anxious to keep walking!
He got big quickly and everyone thought he'd be enormous.
From the beginning he took over!
He has always been mouthy, tasting first and thinking about it later.


He seems to have leveled out at around 54 lbs however. Tall and skinny. The vet says he's perfect.
He was injured at 5 months, a neighbor's dog rolled him, stepped on his shoulder opening it up and stretched all the ligaments and tendons requiring a big surgery. And another 4 months in a strict leg brace and no running. This may have halted growth, as he didn't gain weight for two months after that.

He is a very intelligent boy, learning words before I tried to teach him. He learned to sit for treats at two and a half months. He continues to want to learn, and want to please me. He's very loving, often feeling more like a hundred pounds when he snuggles up to me. He wants to be with me, and protect me.

This takes the form of his barking at every. little. thing. And coming to stand between me and other people including Daddy. He's been known to push Drew aside when he hovers over me at the computer.
He's inquisitive about everything, so I show him nearly everything he is interested in. He loves fetch, and chase and "my teeth are bigger" games. (we don't like those ) He is elegant and rough and tumble. Always up for a game of any kind, he will turn simple activities into games, such as putting away scarves or gloves. He destroys toys for fun, and love a ball.
He's always listening. He tilts his head all the time. He telescopes up his neck if I start a sentence with "do you want..." and knows if I ask a question.
He loves babies, and seems to know they are human puppies which requires a delicate touch. He's rough with big people though. I'm always happy when he merely leans against them.

He likes food, and will try anything, taking it oh so gently from my fingers. He'll roll it around his mouth, and drop it if it's unfamiliar. Then look at it, reach out a paw to touch it, pick it back up and then decide if it's to be swallowed.
He only eats his food if hungry, otherwise he leaves it in the bowl. I never have to worry about overfeeding him.  On the other hand, he makes snap judgements about bunny poop, eat first ask questions later.
He adores tearing up paper. Shred, shred, shred, spitting it out, sometimes sharing the whole fun experience with me holding the edge for him to tear. I think that started when his legs wouldn't bend in the brace. He still sleeps on his back with all legs stick straight up in the air as if the brace is still on.

He tolerates baths and most grooming. He took to sweaters and boots like a champ. He chews at all leashes, seemingly offended at the very concept. He doesn't jump, probably from the brace and four times in his life of having to be on bed rest. Although the vet cleared him to run, and we took him to a field, and he ran like a wild thing, and jumped a stone wall to get to me! Surprise! Look what I can do!

He's learning not to put his mouth on people, slowly. We had to go to lemon juice squirted in if he did it. Now it's enough to brandish the little squirt bottle and he stops.
He's full of joy and wags his tail. Cole seldom wagged his tail, maybe only three times in his life. Milo thinks life is a joy til I'm mad at him and he has no idea why. 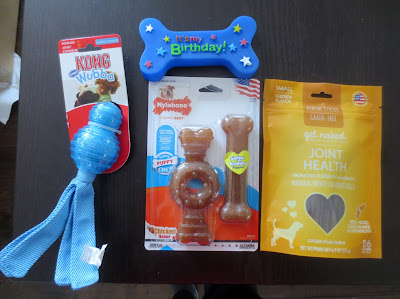 We got him some items to mark the day although every day is a celebration with him!
Either from happiness of finding him... or amazement we survived him that day.
Before I got him, I asked the universe to send a smart loving poodle, that liked kids and other dogs, that wanted to be with me, that would be pretty and sweet and healthy.
I forgot to mention, that won't grab us or the leash!

This is an indestructible chicken toy we gave as an early present. Actually he found it in the bag and took it himself. 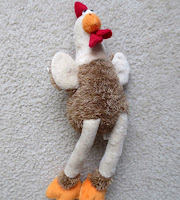 He loves it. He often loves his toys to death, so since it's indestructible, I give it a month.

He will always be my baby.

When I lost Cole I despaired of ever loving again.
Although I will always love Cole, I love Milo to the edges of my heart.

My heart expanded to love again, and that old saying it's better to have loved and lost than never have loved is so true. 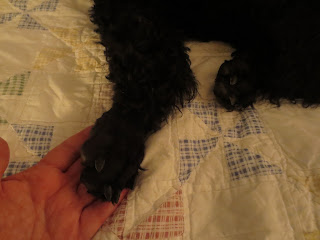 Milo brought me back to humanity from loss, and daily gives me a reason to reach out and love again. He has taught me about touch, and the need for it. I was so injured by childhood I had a hard time being touched, and he's teaching me the benefits of staying close.He comes in from a walk and runs to me, and flops down on my feet. 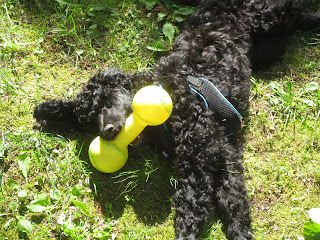 He makes me laugh and scream both. Both emotions are full of feeling and that's a good thing. He lets me know I am not alone, and that I'm safe. He lets me know how much he loves me.
Happy birthday darling!
This is a recent afternoon video. He had just been running around in circles making me scream with laughter, and as soon as I got the ipad he stopped! Still, you can get the idea...