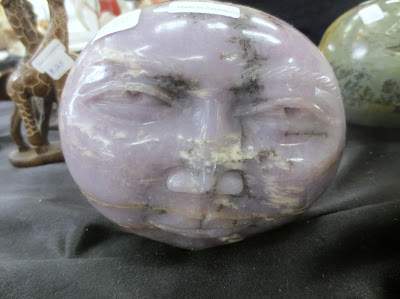 We planned to attend the home show yesterday, for me to see green again since it's also a garden show.

Milo was having none of it. He went right in his crate as usual but this time he panicked. I hate to see this. Pure panic in the form of rigid standing and barking frantically. I let him out and told him just like always we'd see him after his nap. We tried again, but his reaction was worse. I know from experience he escalates quickly and can't come down from it. 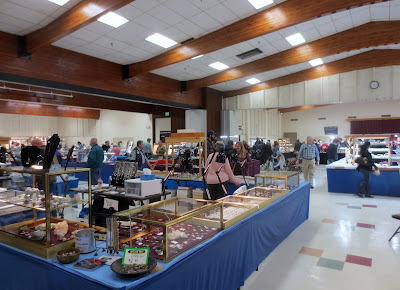 We decided to change our plans and go to Golden to the Gem and Mineral show instead, and let him come along in the car. He couldn't come in but he could ride with us and walk around the old town after. It was enough. He's had so many changes in his little life that there was no need to leave him escalating into a nervous screaming meemee of anxiety. (note: he's usually good to go in and lie down quietly) 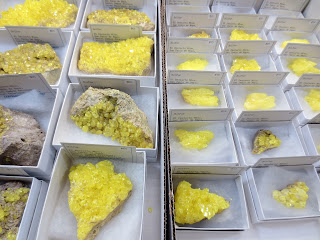 On with the show. A show of rocks. A room full of rocks and the people who like them. People who's life is all about the rock. 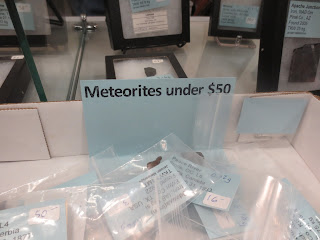 There is a lot to see in a rock and so many kinds of rocks to look at. 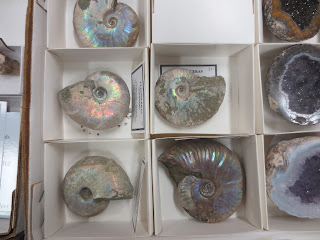 Like people, a rock's true beauty is inside and might need some polishing. It might need to be broken open to see the beauty, and can benefit from some embellishments. As if the rocks themselves, (don't forget a diamond is a rock) aren't sparkly enough, there are people more than wiling to wrap them in silver and bead around them. 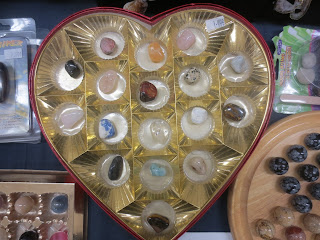 I had fun looking at the people as much as the stones themselves. I chatted with business owners as well as shoppers, noticed there were people of all ages, genders, wealthy to poor, many boots and cowboy hats, teens with furry hats and tatoos, a woman in a dinosaur costume. It was free (unbelievable here) so anyone could wander in and they did. It was held at the fairgrounds building surrounded by jagged mountains and ice.
Driving up it reminded one that we're on a pile of rocks. That the state started as a gold rush, more rocks. That men coming from the East blew up their section of mountain to find rocks to sell and profit from.
Billions of years old, a connection to history itself, these rocks formed slowly. Sometimes trapping little animals and becoming fossils. 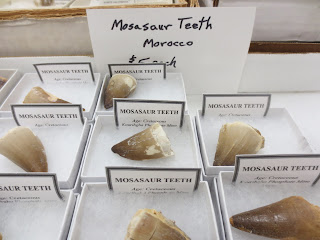 The wood became rock as minerals seeped in. Molecules aligned one way or another ... 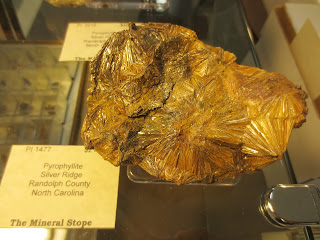 to create brilliant color and shapes. Time, Tincture of Time, created gems for us to enjoy 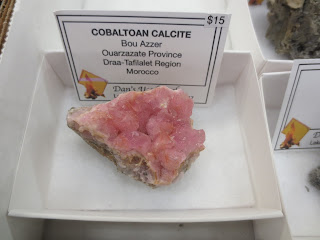 I asked one teen wearing a fuzzy bear hat, wearing two barbells in his upper lip next to some acne and with a pair of brilliant blue eyes, to share with me why he was so excited to find some Herkimer damonds and was purchasing two on little platforms. He was very excited, and said these are beautiful and a good price.

They're from 1961! (apparently a very good year for Herkimer diamonds) I bet he was born after the year 2000. I had to look them up on google and found they are millions of years old, formed in a prior seabed. 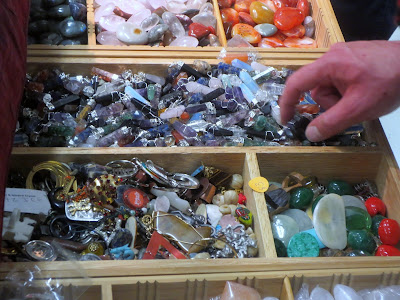 My husband and I dug through a box of long crystals suspended on silver wire, with another woman. I asked her, what she was going to do with all those long pendants. She carefully dug around, invited me to jump in too, and said she was buying gifts for her niece and nephews. At $3 each she said it was a good present. 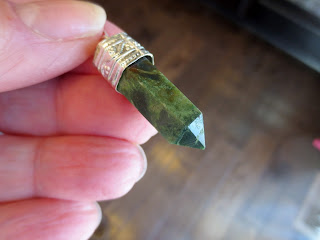 Good indeed, and I wondered how they could cost so little and looked at the business owners. An older couple from a country where women cover their hair and wear conservative clothing. They were carefully wrapping a purchase in paper, then putting in a bag. The woman spoke no English but her smile conveyed friendliness and calm. Her adult son took our money and wrapped our four crystals.

I dithered over cabachons already set with peyote stitch and crystal beads. The owner's MIL makes them, puts leather on the back so they feel soft against your skin, and signs them. At $20 apiece they are a way for a very old woman to make some money while keeping herself occupied making something of beauty. That's win win. 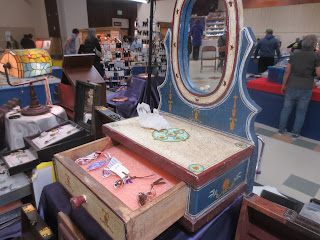 Another vender with jewelry (displayed in antique boxes)  shared that she moved here from Chicago in the 70's and still misses cultural events. I asked where a person could find out what's going on culturally in the area, a website or publication? The Denver post does not do that like my Washington Post did. She said, there is no source for that. There are few high end craft shows anyway. She seemed sad to report this but resigned to the area after nearly 50 years here. Still missing what the East had to offer.

People mention the Denver museum of Art. I say I'll visit when I stop mourning the loss of the National Gallery of Art, the Smithsonian, the Coccoran, The Renwick, The Baltimore museum of Art, the Walters, the Philadelphia, NYC. It's really hard to leave so much behind. It takes a lot of strength to stop looking back and try to find something here that satisfies my urge for beauty.

On the way there, along ugly disentegrating roads amid too much traffic, we listened to a TED podcast on beauty. There is a lot to that discussion. To just give you a tidbit of the hour, there have been studies done that beauty is as necessary to human growth and comfort, and success as touch.  One man built a school based on it, with fresh flowers in the halls, and an emphasis on beauty to enhance learning. His model is now being put in many states. 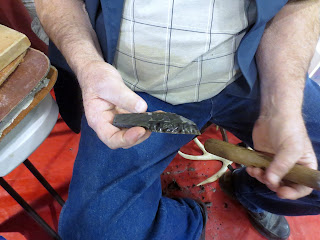 Back to the show, I interviewed a gentleman demonstrating rock knapping. He sat in a puddle of sharp black glassy shards. He held the large working piece in a skin to protect his own. He had many cuts on his large hands, as he manipulated the wooden stick with copper in the center, his only real tool along with his brain. I asked what attracted him to this craft. 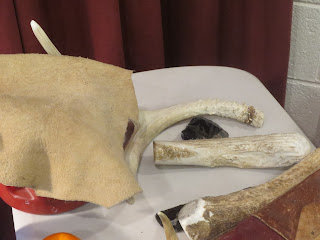 He said as  little boy, he saw a man doing it, and decided he wanted to also. So he learned from watching. I would estimate him to be in his late 60's but I'm not so good at age.

He learned more from "Indians" and simplified the process for me in words, "you have to make regular naps as it looks better" See? chip, chip. I was aware of the pieces breaking off, and stood back unwilling to have a piece fly into my hair or eyes. I continued to interview him and he was more than happy to chat as he worked. chip, chip. I asked if he was "indian" as to me his speech reminded me of Native American cadence, and he laughed and said, "nope. Too much German" with a merry twinkle in his eyes. 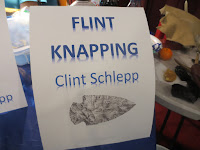 Funny, before approaching him, I would have thought he would be the strong silent type, but he wanted to connect and talk with us. Also funny, the table next to him, demonstrating wire wrapping which I wanted to learn about, had two people engrossed in their own conversation. They ignored us as we stood in front of them, while they discussed that "you have to talk to people! Tell them about...." They never looked at us, never smiled or asked if we wanted to learn. Never talked to us even after I somewhat loudly told DH I wanted to learn about this. Funny. 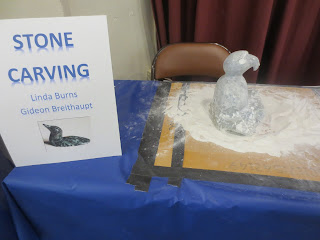 The soapstone carver demonstrator was MIA.
I was highly interested in the embedded faces in these rocks. 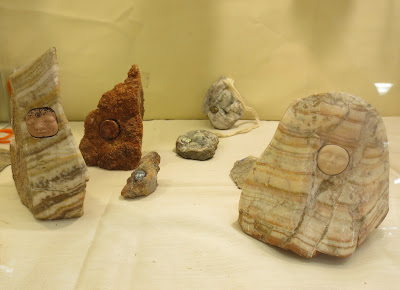 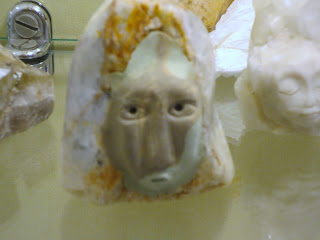 And the carved ones in these. 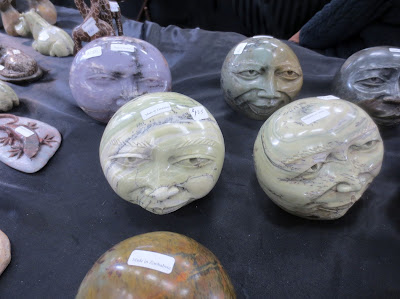 A painter can learn a lot from these faces, angles, eyes, noses, and lips


And this display of rock food was fabulous. 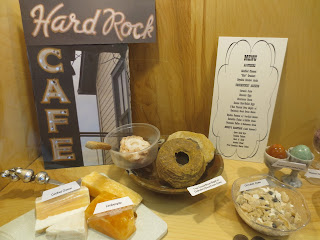 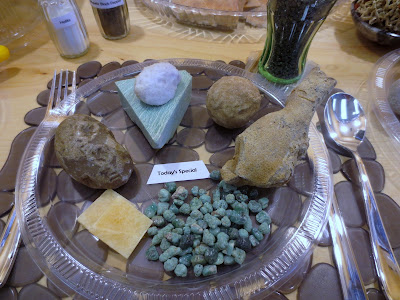 Want some cake?? Don't break your teeth, these are kind of dry and crunchy, 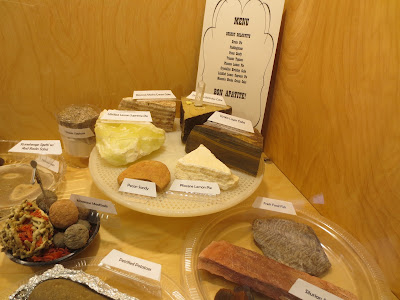 Don't you love how people can see something in a rock? Or a tree or a anything really. The artist within.


I never knew just how rich and varied a rock show could be. I don't know that I need to return to the next one, having now experienced this but it was educational and enjoyable 2 hours. My dh and I could do it together. If was fun to see what interested him. It was fun to learn. It was fun to see all the colors hidden in gray rocks. 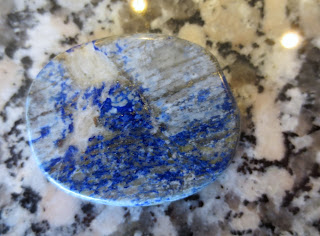 What do you see in our sodalite stone? I see a sort of landscape. The seller said it was lapus lazuili but I think it's sodalite. Doesn't matter, it's lovely.

Milo has had a fascination with rocks since we got him at 8 weeks old. More on his rock collection tomorrow. He would have been a nuisance inside wanting everything he saw.
Link: http://lapaylor.blogspot.com/2018/02/milos-rock-collection.html


linking to:
Our World Tuesday
Travel_Tuesday