It doesn't act like a cold, but it involves a sore throat and irritated sinuses. I needed soup. What to make with what was on hand? The celery looked a bit wilted, the ginger had oxidized a little, some broth containers were out of date but one was in it's date. Bag of lentils... hmmmm

Melt one TBSP butter and small amount of olive oil in deep soup pot. Put above vegetables into the melted oil to soften and absorb it, on medium heat.

bring to a gentle boil then turn heat to simmer, cover and let meld (half hour to 40 min)

it's thick but delish!
I made this up as I went along, so feel free to change any ingredients or amounts. Want it soupier?
add in two quarts of broth

To go along with the soup/ stew we had charcuterie 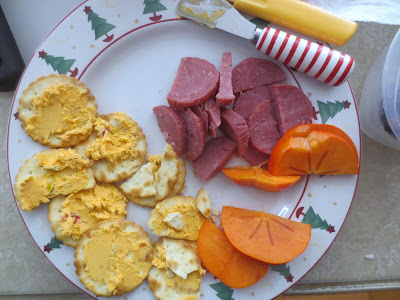 what is it about a plate of little snacks that makes me happy? TJ's garlic crackers, pub cheese with jalepenos, hickory farms turkey sausage, and fresh persimmon slices. 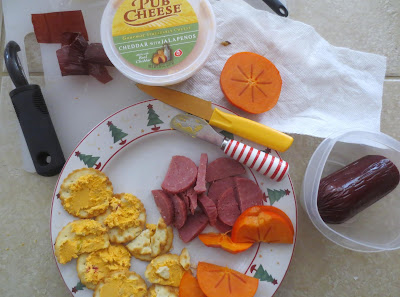 so, again, not foodie blog worthy but yummy and happy food for the day after Christmas.
Now we're off to see what's shakin' in  Golden CO today.

linking with
https://grammysgrid.com/a-themed-linkup-8-for-soup-recipes/
Posted by LA Paylor at 6:50 AM

Email ThisBlogThis!Share to TwitterShare to FacebookShare to Pinterest
Labels: recipes