connections at a craft show


just to put you in the mood, and start you laughing....
I dare you not to laugh til your face hurts at these guys...
US Navy singers 12 (?) days of Christmas 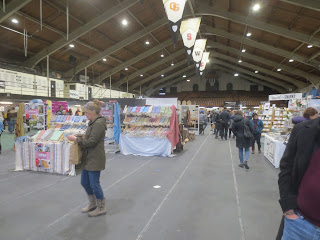 Yesterday at the craft show, two people came up with little baby girls, so sweet, and Milo sat while tiny star hands petted his head.


when we walked into the venue, I spied the one baby smile and call out to Milo, so when her Mom approached, I said, that baby is so happy. The mama smiled an adult version of the baby's smile, bent down and a little hand reached out to feel Milo's head.

Milo sat down and sent his poodle love to the baby. Then the second parent, a dad this time came over saying, "well if it's going to be a love fest..." and squatted down to let his little girl reach out too.

I almost sighed at the sweetness of the image. Both babies squealing... quiet, still Milo looking into their eyes, two parents who loved their babies, and me watching the moment.

tiny star shaped hands softly feeling Milo's hair, the connection was so real and momentary but the mental picture will linger in my mind.

Many people walked by and silently let their hands pass over Milo as we walked. Several came up and told us of their standard poodles over the years. One red haired college student bent over and scratched Milo roughly. He pushed up against her in a poodle lean, leaning into the love. Her bright red hair draped over his black back like a curtain to allow their private moment together. She smiled broadly when she left and said she knew how to scratch a dog!

As we looked at hand made items, I spied a booth sign with a flamingo on it... well you know how I am about flamingos. I commented and the artist jumped up smiling widely to find a fellow admirer. We laughed, I asked how her obsession started, "well...I've been obsessed since childhood" she said. I told her I started as a teen, and asked where she grew up... and was surprised it was nearby Arvada. I said, I caught the bug back in Florida. So way up in the mountains, was a young girl who also loved the graceful pinkness of a flamingo! She said she was so happy to meet fellow flamingo lover!

We tasted many pickles and relishes at one booth. I pass many tasting booths, but this one had piccalilly  and it brought back memories of smelling that when my mother canned it each year. We decided to buy four bottles of different relishes, pickled green beans, etc. As the maker was beautifully packaging them I mentioned the thick snow coming down outside, and concern over our drive home. She said, well if you have to pull over at least you can survive on pickles!
We laughed, and she added, "make sure to let me know if that happens!" and I thought that would be a great marketing story.
"Stranded motorists saved by pickles, story at 11!"

Of all the jewelry, paintings, dog clothes, people clothes, and gifts we saw, those pickles were the only thing we left with! 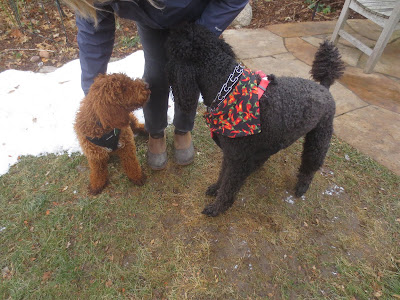 We drove up to meet my long time friend Mary and her new doodle puppy Turbo, before going to the show.
At first Milo was not sure, didn't trust Turbo since he hasn't had his neutering yet, but three snarls later as we walked together (thanks Cesar Milan for letting me know about the pack walking thing) they began to play. Turbo wasn't sure at first as Milo is twice his size, but they ran and jumped, Turbo flashed his sharp new teeth, as they played puppy games like "bump chest" and 'my teeth are bigger" and "try to get me" Milo layed down to be face to face, and at one point Turbo leapt over him. 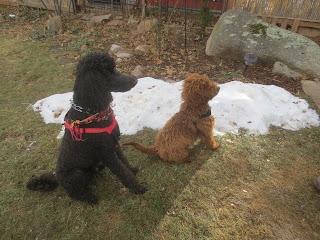 Sometimes friends need a moment to size each other up, and sense whether the other one is trustworthy before jumping into play time. Same with humans.

Mary and I have a long history of playing together, sewing, making art, going places. It's good to know our pups will get along too.
Posted by LA Paylor at 6:41 AM