A story to go along with the quilt... enjoy!


When they met as children, somehow they knew they’d always be friends. It was as if they already knew each other and were just getting back together after a nap.

They were safe. They were connected by a silver thread.
The town folk watched them go by and say, those three are tighter than 3 peanuts in a shell.
They did everything they could together. They shared what life had to offer a child. Pain and joy were the same to all as to one.
When they were about 10 someone’s parents took them to a Fall Festival. The three traveled together through a corn maze, they each had a candied apple, all three tried their hand at the ring toss then they took turns carrying around the goldfish won.
Very few pumpkins were left in the pick-your-own field but three were found.

Alike but different, like them. They fit together well. One was a bit darker, one a bit thinner, one more colorful and bright but they all fit together.
They were better together, stronger and more dynamic. They made a statement, if anyone stopped long enough to notice.
Together they told a story, they shared a past and a future.
Their pumpkins were like them, better for being part of the whole.
Alike but different. Together. 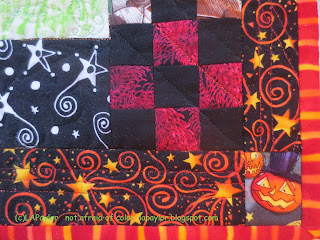 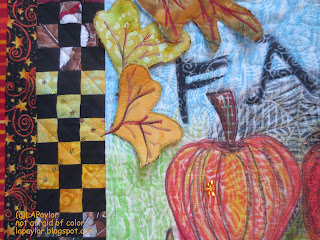 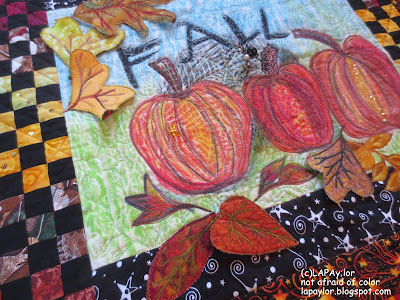 This started life as a piece of plain muslin. On a whim inspired by my recent purchase of three little pumpkins, I sketched with portfolio paint sticks and thought it wasn't good enough to finish til a friend encouraged me. I did love the shading and mix of color/texture in the paint as well as the composition. I began to add borders, then 3-d formed leaves that were thread painted, beads, extras like a little dragonfly and the spider, star sequins in the border.

Email ThisBlogThis!Share to TwitterShare to FacebookShare to Pinterest
Labels: my art