sewing saturday going round in circles

For this week's sewing round up...

the Project Quilting prompt was repetition, which I use as a design principle in all my quilts,I looked up repetition in artwork and found this page  https://magazine.artland.com/the-art-of-repetition-top-10-pattern-artists/ which has lots of photos. I had a couple ideas but returned to a love of circles.

The song inspiring my quilt,  is an oldie but goodie

I got out the fusible box of scraps 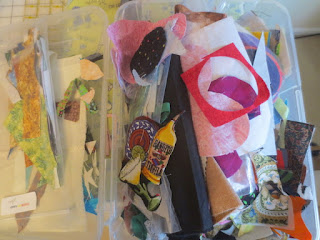 and cut lots of circles, some of which became circles and some became rings when cut down... 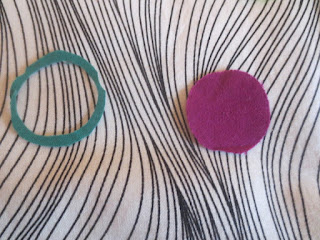 got out white on white fabric with circles 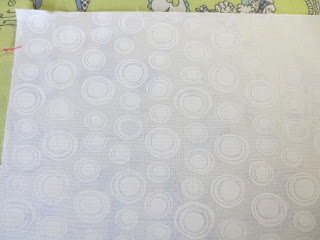 and began building two pieces at the same time, with different backgrounds

Meanwhile I got out paints and did this 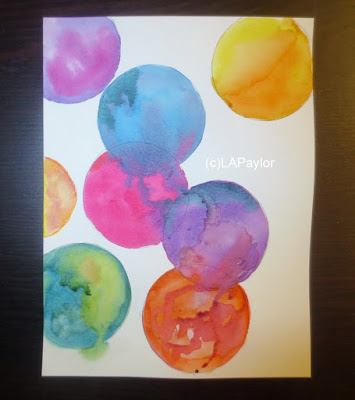 letting colors blend and move across the paper...and then went back to fabric 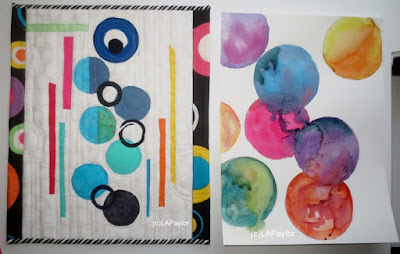 The binding on the quilt is striped, shown on top and bottom, pulled to the back to make a facing on the sides.

I used a scrap of circle fabric from a dance skirt, to make borders, not much left but worked here 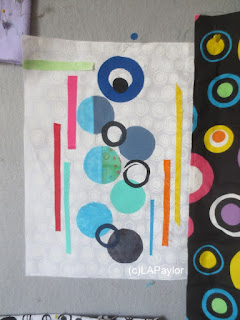 when I started on the second quilt, it was fun but too "active". Both Joy and DH said it was pretty "busy"... 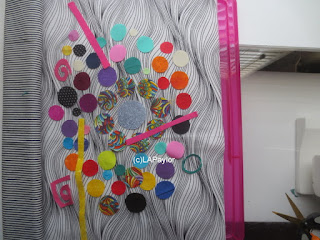 so I changed it a bit, inspired by this song by Chicago 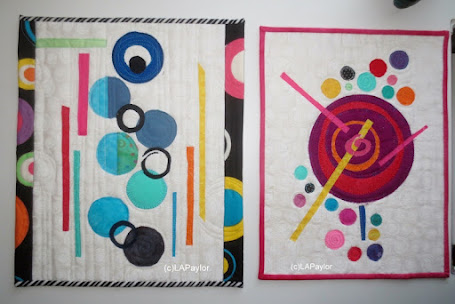 both were made from scraps the way I love to work, improvisational design. I love the mix of sizes, some circles are formed by two fabrics, some solid and some rings,  and both pieces have movement.

along with the painting from this week, I have really explored the theme!

quilters didn't invent improv ... this is one of my fave guitar players version of Norwegian woods 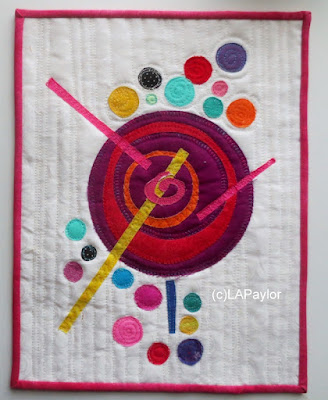 Project quilting, a prompt to make a quilt from conception to finish in one week!

Email ThisBlogThis!Share to TwitterShare to FacebookShare to Pinterest
Labels: project quilting, sewing round up

These are both so gorgeous! I think you should frame your painting and hang it with the quilts as a triptych!

I love your circles. I find circles very attractive to look at, and I love seeing your colorful designs. Happy weekend. hugs-Erika

Fantastic work, LeeAnna! Love them both!

Way to circle around! Love your colorful circles.

Oh, I love both of these!

This project of completing a project in a week seems to be designed just for you. It really brings out your creativity. I love both quilts. Funny side comment: I thought the name of the first quilt sounded kind of familiar—and then it dawned on me. I have always had a hard time hearing lyrics correctly and thought the song was “winner go round in circles” even though that didn’t make sense to me. Thanks for the correction. I was happily misinformed about so many songs throughout my life but I sure am glad we can now look up lyrics online. I hope Project Quilting goes on for a long time because I always look forward to what you do with it.

So many projects! You do a fabulous job of working through the idea, painting the idea and editing your design. Now, I loved the busy version, which is unusual for me. Happy weekend to you!

Hi,
I really like all those circles and bars. And all the different colors you used. Stunning quilt. Have a great day!

Thanks for the link to that article and for sharing your trifecta of fabulous circular art. LOVE!!

Both are so much fun! I love the second one - the colors really pop. Thanks for sharing with Oh Scrap!

LOVE them both! So cool!

Wow! You really hit this one out of the park, LeeAnna. They are fabulous! Then I remind myself that they are small! 9x12! That makes them spectacular! Thanks for linking the songs! That’s frosting on the cake! ❤️

Very cool, like them both; but think the 2nd one is my favorite. I like the big burst of color I think is why. I love color.
Traveling Suitcase

I especially love the last one with the "chop sticks". Reminds me of Chinese cooking with a wok. Great job with all of them.

The three of them are beautiful! Great designs, and lovely cut circles, painted, and printed (this dance skirt looks wonderful!).
Thank you for sharing your inspiration and process, and linking up ;)

WOW! love all three art pieces. Does Anyone Know What Time It Is must be my favorite.

Love, love, love each of the circle projects! The "time" one is probably my favorite too.

Those are very creative circle projects - I like them both!

I love both of these quilts! DH and I just got back from a quick vacay to Palm Springs and these would be right at home there among the mid-century modern art and architecture. Well done!

Oh your quilt with the circles is divine ~ lovely ~ Xo

Wishing you love and peace in your days,

A ShutterBug Explores,
aka (A Creative Harbor)

Both fabulous, circles really do give a great creative hug.
Happy PPF!

oh what lovely circles and sewing! So lovely! I love how colourful those circles are. Circles make me so happy. Happy PPF! Have a magical weekend!

Popped back to see your lovely work once again, LeeAnna, and remember those songs! Thanks for linking up to TGIFF!

I love both pieces so much! And the songs that inspired them...perfection. Thanks for sharing on Wednesday Wait Loss.

Love your circle pieces, and the inspiration for them. The title of your post made me think of this tune, though, from Billy Preston: https://youtu.be/ghj5V5cUo1s :-)