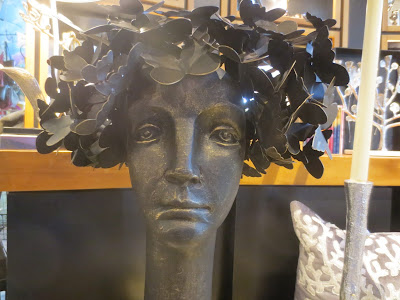 Looking out at the morning rays...
welcome to this week's happy homemaker  post.

The image above is from a recent trip to the Denver Botanical Gardens. I'll do a post later this week with some really fun pictures taken there. 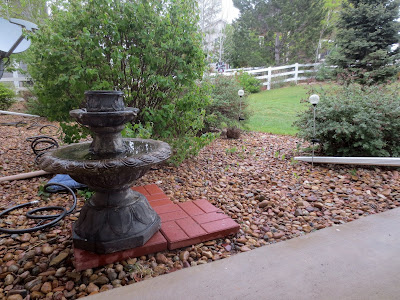 The weather in Aurora Colorado this week
cold. wet.
It's been extreme for a couple weeks now. It ramped up last week to nearly 90 F for days, and we had to put on the AC. Then in one afternoon, the temps fell to the high 30's and the rains started. It's not that dry here in the high Desert, at least in Aurora.
It's been cloudy and rainy for a couple days, and will be til at least Wednesday.
Snow predicted tonight. Again. 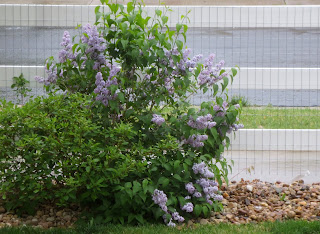 Looking out from my perch

I see less dust, we got out the swiffer wand, and the refills for some other swiffer product to wedge onto it, and dusted the blinds, and surfaces. There's a lot of dust here. I dusted the ceiling fan blades from winter accumulations. The tops of toilet lids! I mopped the floors yesterday, and we cleaned the carpet in the family room, where Milo plopped down after walking through the piles of new bird poo all over the sidewalks. Then we cleaned Milo and he looks like a show poodle!
I also see my new art supplies for painting and drawing spread out in front of me. I found leaving them out allows me to create much more often.
To Do
always a lot to do...
Finish brushing out that long poodle leg hair and shape with a scissor
paint daily
watch the new series on being creative by Jan Blencowe
(finished "sketchbook revival now)
write posts on the gardens, on my recent quilt finish, and the Thursday "I Like" post
laundry, always
plant the vegetables as soon as frost is over
I called Womans Day magazine to correct the two subscriptions (somehow I ordered one by mail, and one on a special offer so I was getting two a month! )
work in the studio on the painted birds piece
enjoy the Jacquie Lawson country garden "advent" calendar my friend Linda sent for my birthday
(it's daily info, and activities involving birds and flowers, virtually planting pretties, playing games)

Watching
we finished Murdoch Mysteries (canada) and found the best series, a new BBC one, called Queens of Mystery.  It's so quirky and intriguing about a young woman raised by her three mystery writing aunts after her mother disappears. She's now grown and a police officer. So fun! But it's current and there are only 3 two hour cases in 6 shows at the moment.
I'm in mourning as my guy didn't win American Idol... but as soon as he makes an album I'll buy it
Survivor is over and again my guy didn't win, but the Amazing Race is back, yea!
Southern Charm out of Charleston is back, and I'll enjoy the accents again, y'all.

We were watching Time Team (which aired for about 15 seasons in England) but found out Acorn didn't show them in order, just scattered a selection from the seasons. We switched to watch the first 3 seasons on Prime, but then what?

I'm still watching all the videos by Brenne Brown on youtube. She's entertainingly brilliant. (thanks to my friend Cindy for recommending her) She reminds us that being strong is not pushing other people around, or armoring up (pretending not to have feelings) but being authentic and vulnerable, and living this obstacle course of life bravely.
Reading
those woman's day magazines! lol. And I read the dollmaker's book I checked out, and started the fascinating book "Woman who write are dangerous" I had no idea. Since people began to write, women have been trying to write too. Often having to take men's names so they can be published.
As if women weren't real people! Who started that? men.... gotta hold onto your power somehow I suppose. What a waste... subjugating groups of any kind.

I'm finishing up Shelved under murder... the librarian series  my husband is also reading
When I sat on the back porch, I was reading map of heaven and am almost finished

eating
people chow... nothing spectacular now that the birthday cake is gone
hopefully drinking more fluids, now that my clue to drink (I'm not thirsty) is to drink a glass of water after I go to the bathroom. I fainted from dehydration. DH read that our sense of thirst diminishes as we age. Yet another fun thing about aging.
making
now here's where I am busy. I have a new excitement about painting and drawing. Self expression and seeing color on the paper, and watching it move around and blend with others.
So rewarding.
I'm taking another class online, just started it, and the teacher has reminded us the importance of creativity in life. Not so much for products to sell, but for the spirit. She and Brenne Brown are both saying the same thing... "show up"

which leads me to a lesson learned
Make your art, put yourself into it, then share it. I knew this, I even tall groups the same thing when I speak to them. But  I heard it said a new way this weekend.
It's about the making and sharing.
There will be critics in life. Especially these days of social media, people for some reason feel entitled to tell others what they don't like.
My new pet peeve.
Criticizing people openly for not being you. What ever happened to "if you don't have something nice to say, then don't say anything"? I mean, why should you tell people what you don't like about them, when it's their choice to be how they are? What happened to acceptance? You don't have to act like them or make their kind of art, or read what they read... watch what they watch... just accept and enjoy the differences. Then do your thing. Nothing to prove, nothing to defend, just do your thing.
As long as you're not trying to overpower another group and hold them back, since we're all in this together and all deserve respect and all have something to contribute.
Know what I mean?
So Brenne said, don't armor up and say you don't care what other people say... we are hardwired to fit into groups. Just don't let critics have so much power over you. Hear them, then put them in their place, as having one person's opinion, and make your art, live your life, make your decisions bravely.

This goes hand in hand with self esteem. People with true strength are able to be authentic, without being defensive or making others agree with them. It's a good goal and skill to develop.

anyway... so... this week, I paint, and sort the studio supplies, sew. Cook. walk. think. laugh. write. share with those who will see me, hear me, value me.

inspiration from my friends...