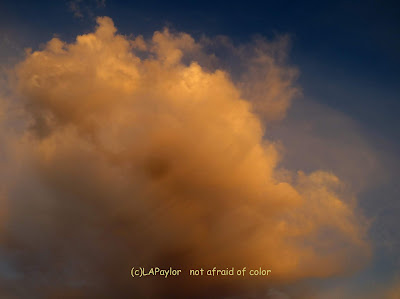 Welcome to this week's list of likes... so many.... from garden centers to videos to dogs playing on a hot summer day... Let's get started.
I liked the cloud's intense color and highlights on our sunset walk this week. It looks like a painting to me.
This statue for the garden made me happy this weekend 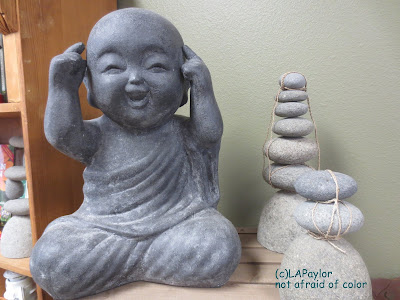 I used to go to the garden center in MD just to see all the colors, so this weekend we checked out ones in Aurora and Parker. 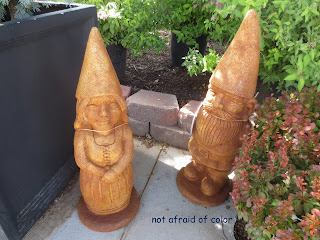 Mr and Mrs gnome will welcome you in to share the beauty with me... 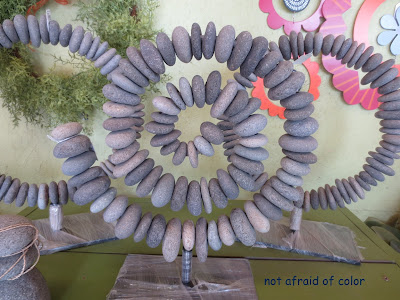 Now I know what to do with Milo's rock collection.
BTW, I had a miracle moment this week when Milo urped up a rock he swallowed on Friday night. We were visiting with our neighbor when he grabbed another rock. I tried to get it out of his mouth but he rolled over and swallowed it. We looked for it hoping he hadn't and waited a couple days watching for signs of distress. Then on a walk, out it came, thank God! What a blessing.

I've tried to stop him from picking them up, when I see it I pull them out of his mouth, but I just don't know short of electo-shock therapy how to stop him. 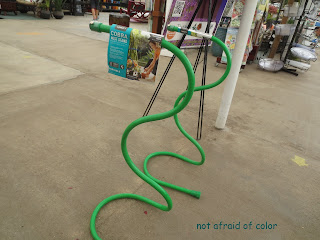 Back to the garden center... look at these cobra hoses.

Then there were the guardians... 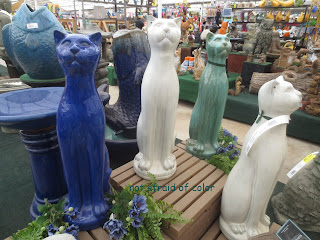 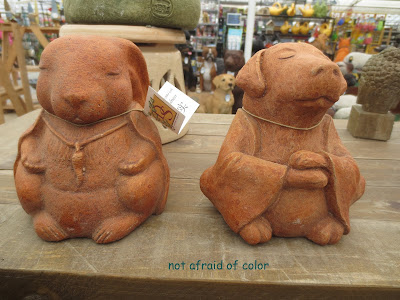 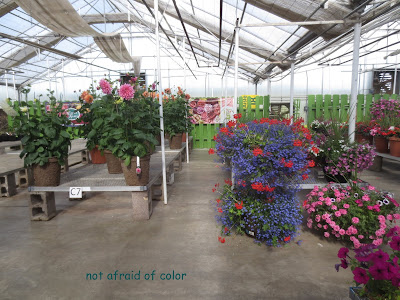 and all the flowers!!! 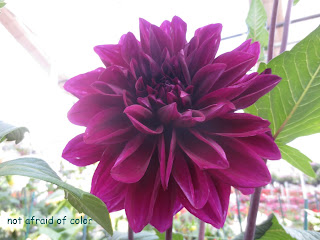 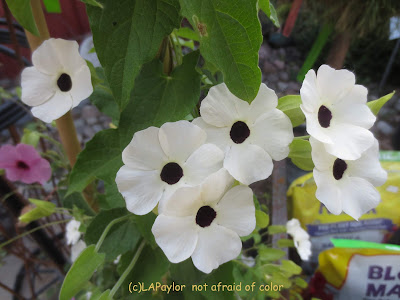 So dramatic! I could do patterns like this and people would say it wasn't realistic. Thanks Mother Nature... hope we can take care of all you've given us 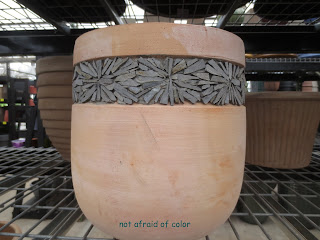 beautiful pots too heavy to lift! 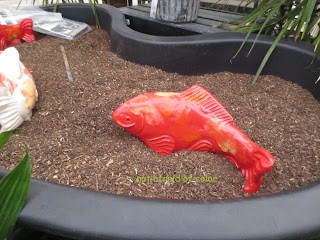 cool fish to swim through the flowers 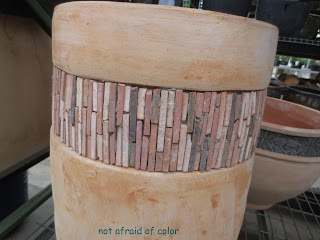 Love the design of this modern, yet timeless pot. 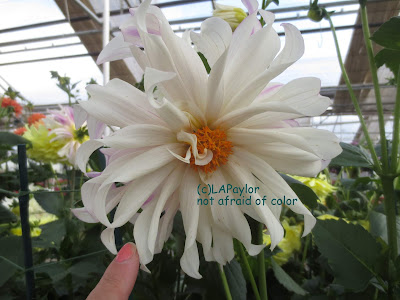 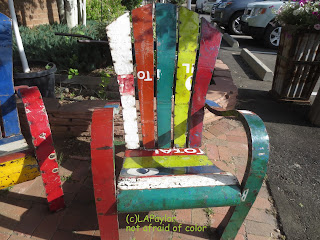 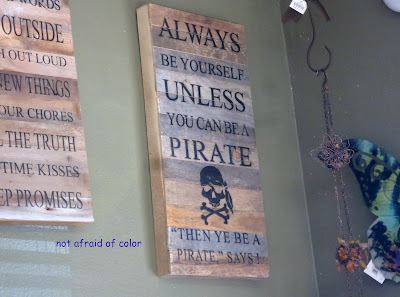 I liked learning to fold a towel into a sea turtle at a neighbor's house while our dogs played. 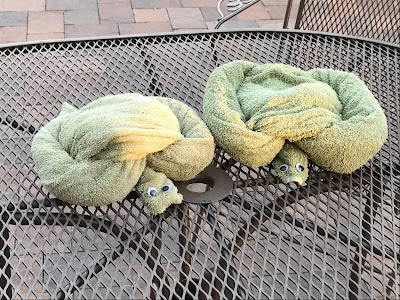 The 9 year old daughter was learning to do it so she could show her class in a demo.

She was highly distracted and having a hard time paying attention to the video so I had her teach me.

Mine is on the left, and the mom said she saw monkeys from folded towels too...
I liked sharing the moment with them while Milo played.


We also went to some neighborhood yard sales and met the most astounding people! From the man from Louisiana playing cajun music to the massage therapist I want to become friends with (when we were leaving I said I will need your number so we can become best friends and she said, but of course! And got her card, when I found out she was a therapist! ) to the two couples who moved in next to each other when the houses were built, to the woman who used to juggle at the Renaissance Festival. 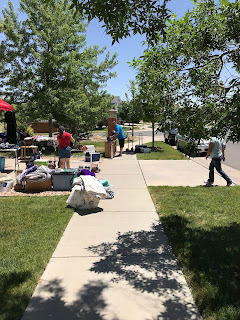 We bought an entertainment center from a man who "adopted" a boy who's father was killed in the line of duty as a policeman, what heart.
Look at the antique sewing chair I found, but didn't purchase 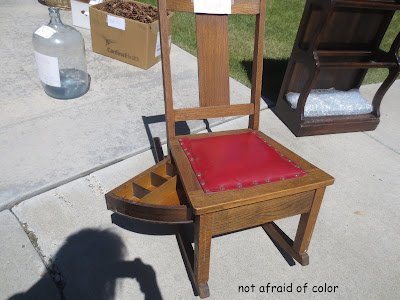 sure hope that didn't go to goodwill. I suggested if she didn't sell it to send it to Smithsonian! Or to historical society in Arvada.

Milo's Moments
I like yard sales too.... I met lots of people and dogs, and ate more than a few chips dropped on the ground! 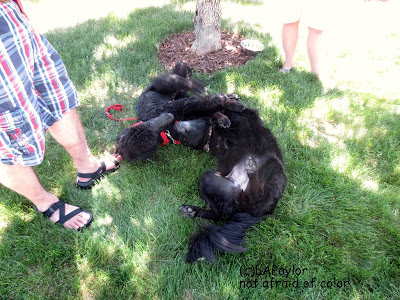 I met this dog, staying over at her neighbors... it was hot and she was older but we laid around 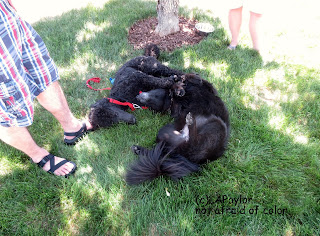 and tousled then just laid around together. 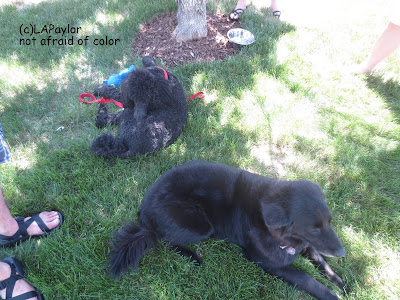 It's nice to just be with friends even if you aren't doing a lot, right?
Mama's friends are also writing "I  Like" posts, wanna see?

I enjoyed your post. It’s slmost like you had s video camera on ad I felt like I was with you. That chair is quite amazing. Thsnks for sharing.

Good Morning!
So many great finds at the garden center! Those cobra hoses - I've never seen or heard of them but very cobra-ish! Oh Milo, you can't EAT the stones. Goodness, thank heavens that one came back out. Those statues remind me of Dominic up on his knees - we call him a meerkat when he does that. Gotta love yard sales!! Happy Thursday! ~smile~ Roseanne

I would spend hours at that garden center (not in summer, unfortunately). Those cobra hoses and a red fish? Milo is so lucky to have you as his mom! I have never heard of a sewing chair like that. Very cool.

I love the idea with a rock spiral... I will search some cool stones when we visit the beach ;O)

My husband is afraid to let me loose in the garden center. I love the statues you saw! Scout is sorta over the rock thing. I had a bunch of balls from all our dogs and that is her new obsession--especially since she isn't allowed to bring them in the house. Have a great week!

That rock sculpture is nifty and the antique sewing chair is awesome. I've never seen anything like that. So cool!

Oh, I wish I lived closer...I could meet you face to face AND I would have purchased that chair! No more eating rocks, Mr Milo!

That garden center looked like FUN. I lived close to a huge one in Minneapolis (40+ yrs ago)and like to go walk through just to look. I have a brown thumb when it comes to plants, but I really do enjoy flowers.

The antique chair is a reminder of how clever people used to be before machines took over our lives.

Looks like fun at the garden center! I liked all the statues you showed. I've been wanting a gnome for my garden, but can't find one that doesn't look creepy, lol! The one you photographed looked pretty neat, though!

Garden centers are lots of fun to browse around in. Tell that Milo we sent a howdy! Thanks for joining the Thankful Thursday Blog Hop!

Oh that sewing chair! I bet it was hard to leave it there. What a fun week.

So many great finds!

I love all of these, especially those stone spirals. So very cool!

I love those towel animals! So cute! Thanks for linking up today!

I love garden art, but not the prices. Even the plants have gotten too expensive. That dahlia is gorgeous, such a vibrant color. I worried that Milo might swallow a stone. Glad he urped it up. I avoid yard sales because I just don't need more stuff. Have a good weekend.
Pat

Oh, I love that sewing chair and the rock spiral is amazing. Such a nice way to get to know the neighbors. Garden centers are my downfall.. We lost our beloved Border Collie from swallowing a rock. We almost had him trained with a ball, too. I worry about Milo! Cute towel animals!

So glad you are meeting nice people - life is so much better with friends!!! We have been frequenting thrift stores, yard sales, antique stores, you name it - the key is to know what you are looking for and not let yourself get distracted into purchasing stuff for stuff's sake!

Sounds like a lovely neighborhood. Oh I like the rock spiral. Driving up to the middle of nowhere there were piles of rocks set along the bluff it was fun, and I thought someone stopped, sat for a while on that overlook, and decided that rocks needed to form a cairn.

You have the knack for photographing the interesting things around you. Love those flowers. My friend's dog use to do that. She would put a harness (?) around his mouth so he couldn't during walks.

...you sure found some neat stuff, love those spiral stone sculptures! Thanks for sharing, enjoy!

Garden centers are fun places, so much to see. I must confess I'm not a fan of (Buddha) statues but atleast that one has a cute smile. - That sewing chair was cool and the dogs look to be having a grand time. Oh my eating rocks...not good at all. Our cats like eating rubber bands, also not goo.

Oh no! Milo eating rocks! Hard to keep him away from them I am sure. He is so cute! Loved the market and the yard sale...especially that pretty dahlia! Great post. Have a wonderful weekend.

You're such a prolific photographer, my dear Lady L., that I have to choose what I say, because there aren't enough words for all of it!
First, I looked up the difference between Budha and Buddha, and learned something new (which we should all do, every day), https://www.thebluebudha.com.au/for-those-of-you-who-wonder-budha-vs-buddha/
First: I love your Baby Buddha photo. Second: you'd better lock up the rocks so Milo doesn't eat any more. Our little dog is omnivorous and is forever scaring me with the things she eats. Third, I think that antique sewing chair certainly deserves a good home. Next: I'm glad Milo has a new playmate, and last but not least, I hope you are well.
Kay
An Unfittie's Guide to Adventurous Travel

LOL — I seem to have gotten my numbering mixed up, but you know what I mean!
K

Love those rock spirals and the turtle towels!!

Yard sales and garden centers...always a good way to spend some spare time!

It seems Milo has a thing for rocks. I can see that would be scary. Perhaps he’ll grow out of it. Gosh isn’t that sewing chair the neatest thing! Yard sales are the best just because you do get to chat with folks. And everyone has their story. Grist for the writing mill, LeeAnna.

so many fascinating things -

do you recall the price on the antique sewing chair ??is this in DC??I love how much fun milo has

I love the patchwork quilt . It reminds me of the quilts my granny used to make.

What a wonderful day you had. How fun. Love the pups at the end. A huge Awww.

Have a fabulous day and week. ♥