sofa, TV and a dress 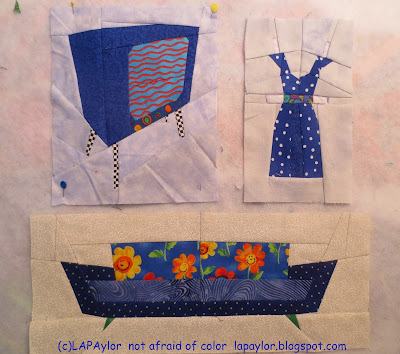 I have had a lot of fun lately using my blue scraps.
The RSC2016 party going on is celebrating the color blue. Following my mantra of "USE IT!" this year, I tried some patterns from a book I bought called The paper pieced home. 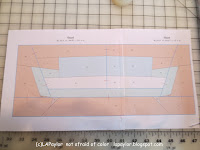 My review?
While I love the designs, so many of them clever retro items...
While I love paper piecing...
I do not enjoy the format of these patterns. 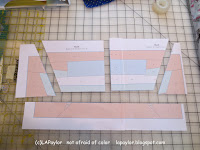 So you print them out from a cd. The author has not added seam allowances or broken the pattern into sections. You have to cut VERY CAREFULLY on the little blue line to create sections.

I wish I had taken each section to the copier and printed again because having no seam allowances to sew through made the whole process very unstable. Grrrrrr. Rip, rip, rip.

That being said, I might have to do 12 sofas in rainbow colors this year. AFTER I print out the sections again this time with seam allowances all around. That might make the section joining easier. It just makes me cross to pay for a pattern and it doesn't do what you expect. 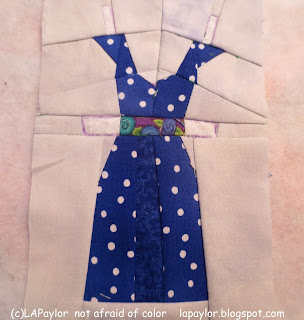 The little paper doll dress is cute but again, rejoining 9 sections on a little block is annoying when they squiggle around. Still, it's cute, which is why I bought the book. 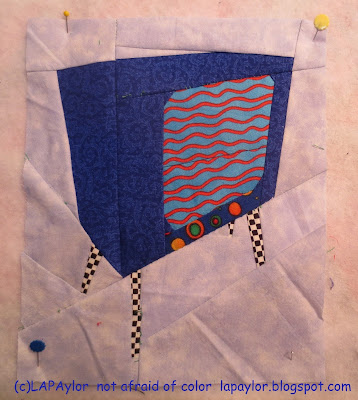 We had an enormous cabinet tv in the 60's. One where you had to adjust the antennae. You had to get up from a sofa to turn knobs to change it to one of the 6 available channels! The squiggly line showed up when the programs went off the air at the end of the night and they played the National Anthem. 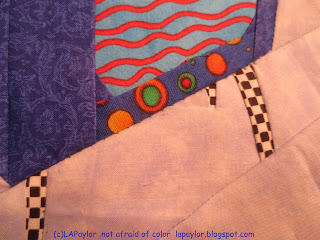 I only wish I had a blue tv now! I love the little circle fabric used in just the right spot to make crazy knobs. 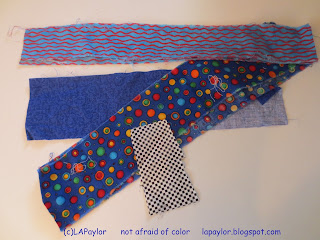 On the TV we had when I was growing up, the knobs fell off, so we often had to turn the channels with a pair of pliers. I was the "remote control" because I was the youngest. I could be called in from another room to change the channel. If the picture was hazy, I could be called into service to hold the antennae in an awkward position.
Can you relate?