It all started with a poodle (embroidery) 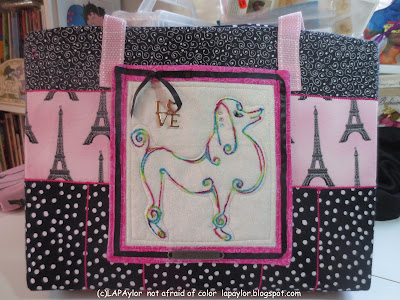 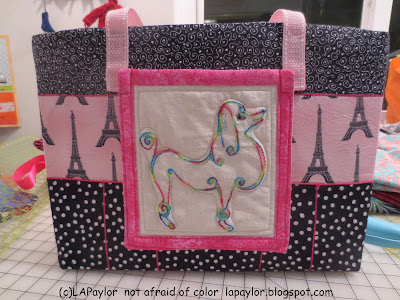 A week or so ago I did this hand embroidered poodle, (see that post  CLICK HERE !
I decided to turn it into a pocket for a tote. I bordered it with pink, layered it with backing, batting and sewed around all edges doing an envelop turn. Quilted it and added in a few crystals...
After the whole tote was done, I didn't like the amount of pink so I added the black ribbon you see on the top photo 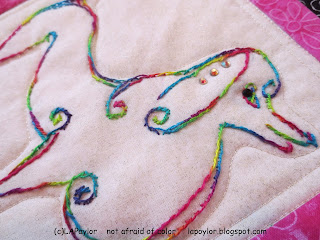 that was the easy part. I thought "I have designed hundreds, er, tens of, um other totes I can just start making one with my Eiffel Tower and favorite spots fabrics". MUCH harder than it should have been. 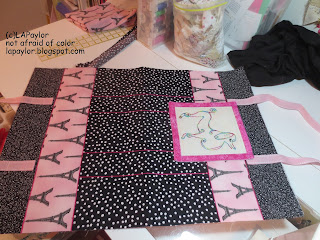 I estimated a size, pieced the three main fabrics together, so that when it was folded up it would have the Eiffel Towers upright, put in fast to fuse stabilizer instead of batting backed it and quilted.
The majority of quilting was done by couching the hot pink ribbon... 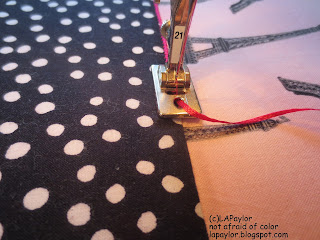 along the pink, then vertically as well. Several more quilting lines done with black thread. The inside (which was the backing) is pink too.
Some pink webbing for handles are next, attache the pocket, add in the zipper gusset, 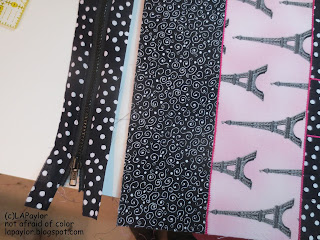 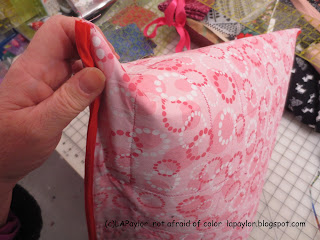 sew up the sides, cover the seam allowance with bias tape, box the corners to make a gusset, turn it right sides out and press in a fold line so it stands up fine.
that's the backing/purse insides 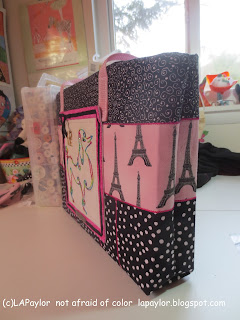 Add in a  couple of embellishments like the Love emblem, and this little reminder... 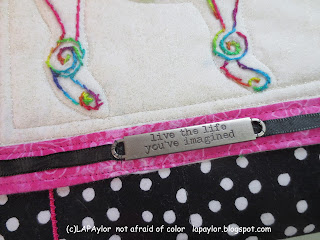 I was unhappy to see my embroidery stitches on the toes start to make that little ladder thing. I thought I had done it tight enough, but with working the bag, the pocket got some mushing around. Any suggestions to avoid the ladder look are appreciated.