This week with it's snowstorms, was distracting for sewing. I have only three things to show...

I got distracted by putting scraps away and sewed the smallest ones into this red piece... very soothing and meditative while listening to my book on disc.
It was Halloween week,
and despite the snow and extreme cold (the high today was under 30F) last night, we sat outside for a while remembering previous Halloweens where we dressed up and gave out candy from chairs out front of our MD house. We shared some red wine from Colorado, and Milo sat on DH's lap for a bit.
This year was the coldest, just after the 5th snow of October...
My favorite costume was the inflatable waving guy you see at car dealerships. My favorite comment was when I asked two little boys which candy was their favorite.
"this one, and this one,... ummmm and THIS one!" said the first
the second one needed encouragement to reach in and choose, and the first one said, 'I'm waiting for you derek!" (places to go, things to do...) I said, he'll be with you in a moment, he's making a decision! First boy looks around and says, "your house is not even a little bit scary!"
I don't know if that was good or bad but replied, " that's the way we like it"
we sat and watched as kids went door to door, or sometimes, from the car to a door, then dashing back into the car. We looked at the changing sky as the moon came out 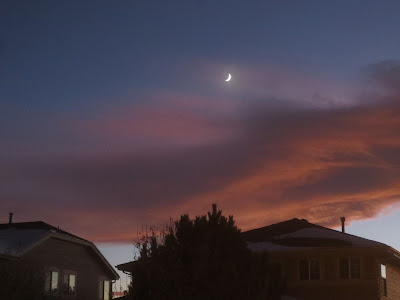 and hoped those were not snow clouds again... OMG. 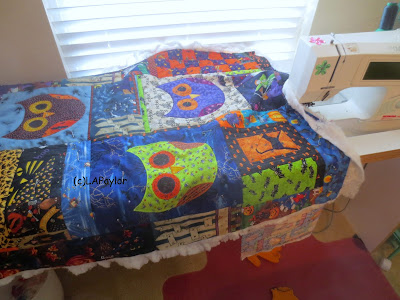 I pieced together a backing fabric (of martini's and pretzels... adult trick or treats) and found a batting stored in the closet. Unfortunately it's an annoying batting... mountain mist 100% cotton that falls apart when you breathe on it. It's snagging, wrinkling, puffing up, and getting fibers on the quilt.
I did all the straight line quilting with the walking foot, and am now filling in with free motion and metallic threads. the more I quilt the more it needs... 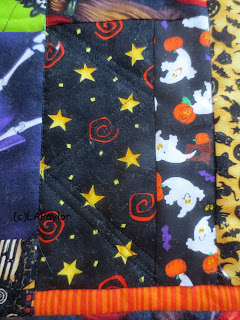 The quilting doesn't show up much, so I go around the motifs, and do some zig zags, some leaves around the owls after quilting around them. It could take a while. 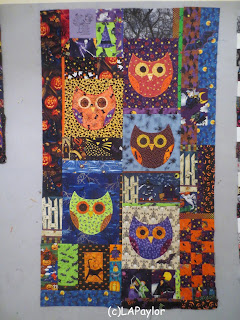 I stopped and looked for a wild striped binding but nothing showed up well, so I settled on a mottled purple. It wants finishing.
I had to get out the big iron and thought I'd share how I control the chord... a fabric napkin holder! 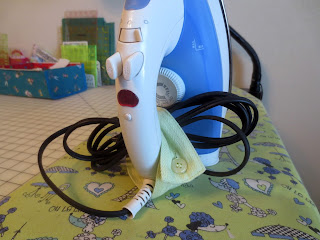 so not much sewing, but the design wall was cleared of little threads with the lint roller (it took 4 sheets) and I feel a bit lost without a RSC color to look forward to. I counted on 11 colors when I added up how many blocks to make of each color so I must supplement them or make smaller quilts.

I have many tops to be quilted now, so that may be what takes up my sewing time, but the actual quilting has become a bit stressful physically, not as much fun as making blocks or designing a top.