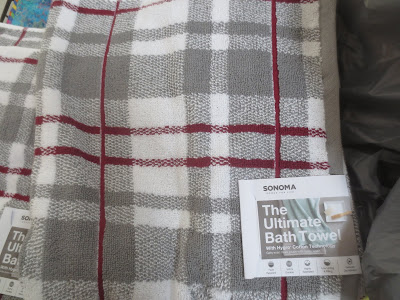 
I was just shopping at Khols for underwear, but as one does, I walked around the store to remind myself what else I "need''


They were thick, not threadbare, and subtly colored.


subtle... not a word usually connected with my design sense of the weird and eclectic world of a 4 year old girl. I would go for a towel with rudolph on it complete with red blinking nose, not these gray towels with a dark red streak running through, like a dirty tartan.

But... they called to me, they taunted me with being fashionable and new, and maybe if I got them I'd be considered fashionable.


I fingered the soft, thick towel edge, pausing sideways on my way to more important purchases, my husband trapped behind me now having towel choices thrust upon him.


I imagine he was thinking, "I was so close to the running shoes.... " but because he loves me and wants peace in his life, he answered my question with, "sure let's get two"


We had a coupon for $10 and a 30% off coupon so basically my "Spaving" (spending while saving) self was appeased with the fact that they would only cost $6 each if that!


HA! That cinched it... we'll now be fashionable and hip with gray.
For Christmas.

Email ThisBlogThis!Share to TwitterShare to FacebookShare to Pinterest
Labels: can you relate?