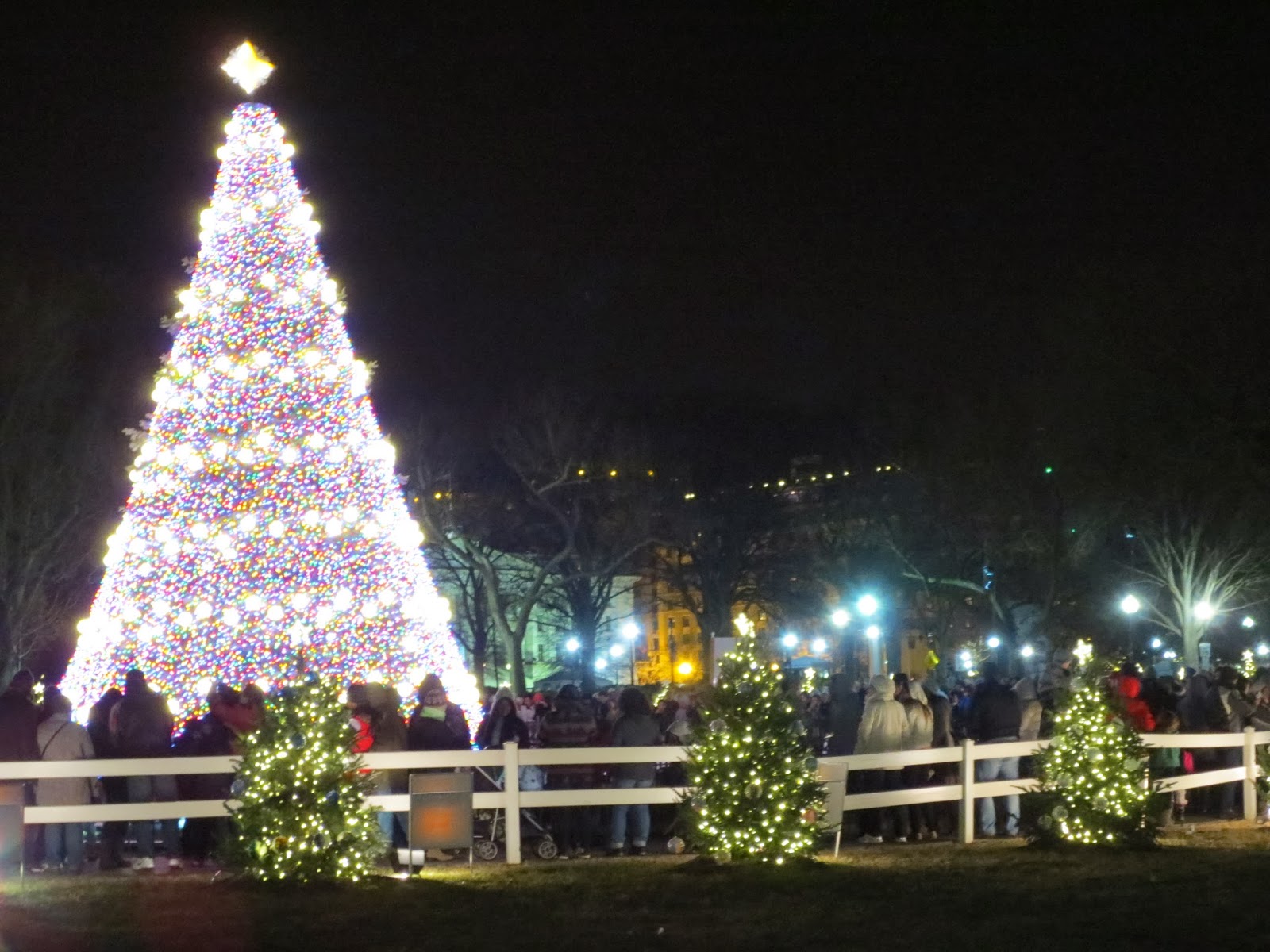 We wanted to do something a bit festive on Christmas night so we bundled up, and drove to DC to join the thousands of people looking at the National Christmas trees. Cole especially looks forward to these yearly trips, as he LOVES our Nation's capital. I suspect he loves the international smells but he bolts out of the car, and uncharacteristically starts pulling ahead to the end of his leash as if he knows where we are going. Now that he's a senior, it's really refreshing seeing him so excited again.
I love going there too, as there is such a fun vibe.
If you wondered where the tourists were, it's here.
We heard many languages, and saw many people shivering while taking pictures of the trees, White House, Monument, and each other. Waaaaay too many baby carriages. If you've never been, there is a tree for each state, with clear plastic ornaments decorated by
children from that state. There is a stage, Santa house, nativity scene, and usually a yule log burning as well. 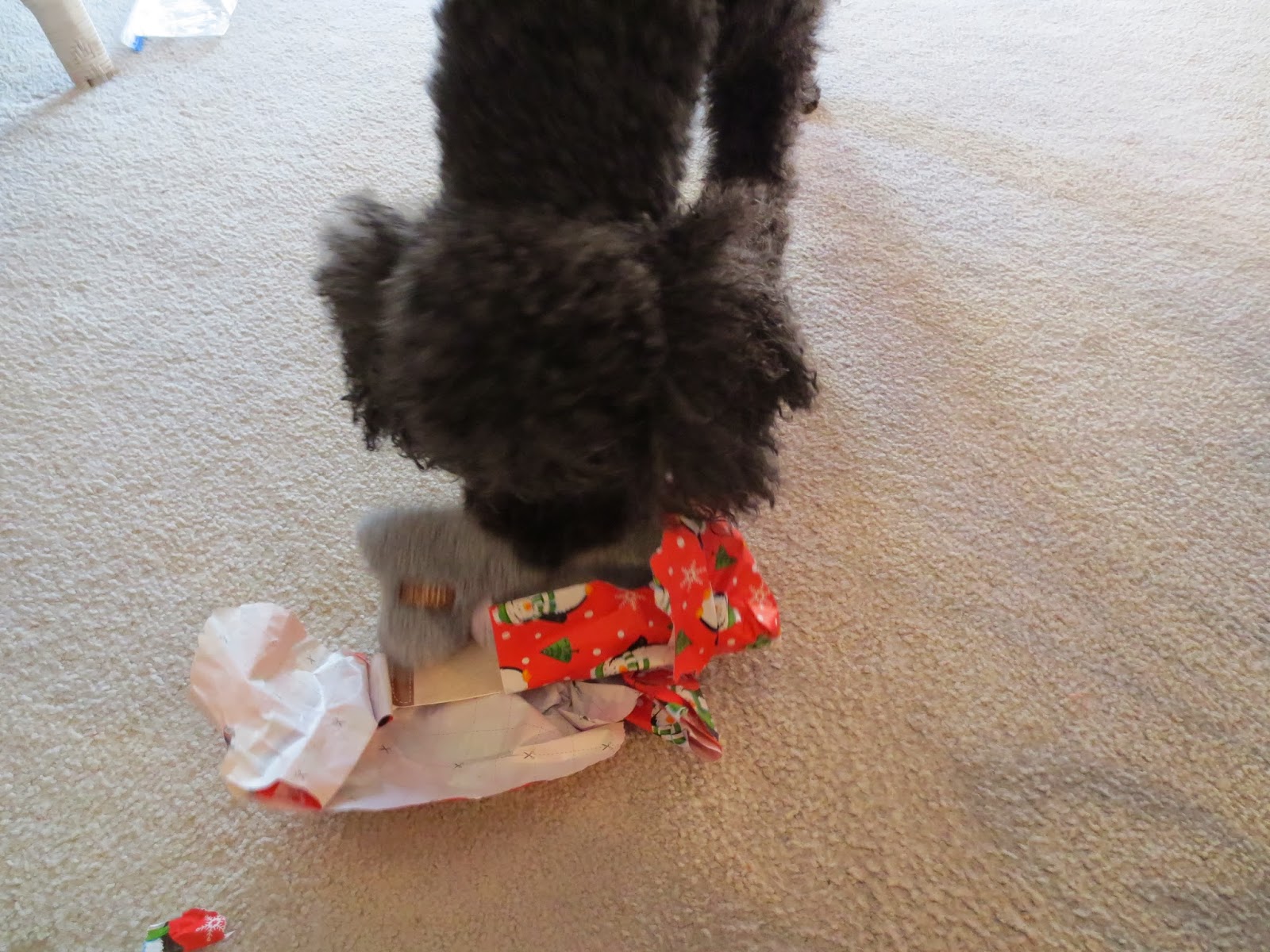 Earlier that morning we opened our little stash of gifts to each other. Cole was thrilled to see three new tweety birds, that still tweet, a pig ear, a bone, and this gift from his Aunt Patti.

I am thrilled to have an ipod so I can kind of feel like I'm living in the current century, while taking the daily walks-with-poodle. I can now hear music and books while waiting for someone to sniff a tree for the meeelionth time. 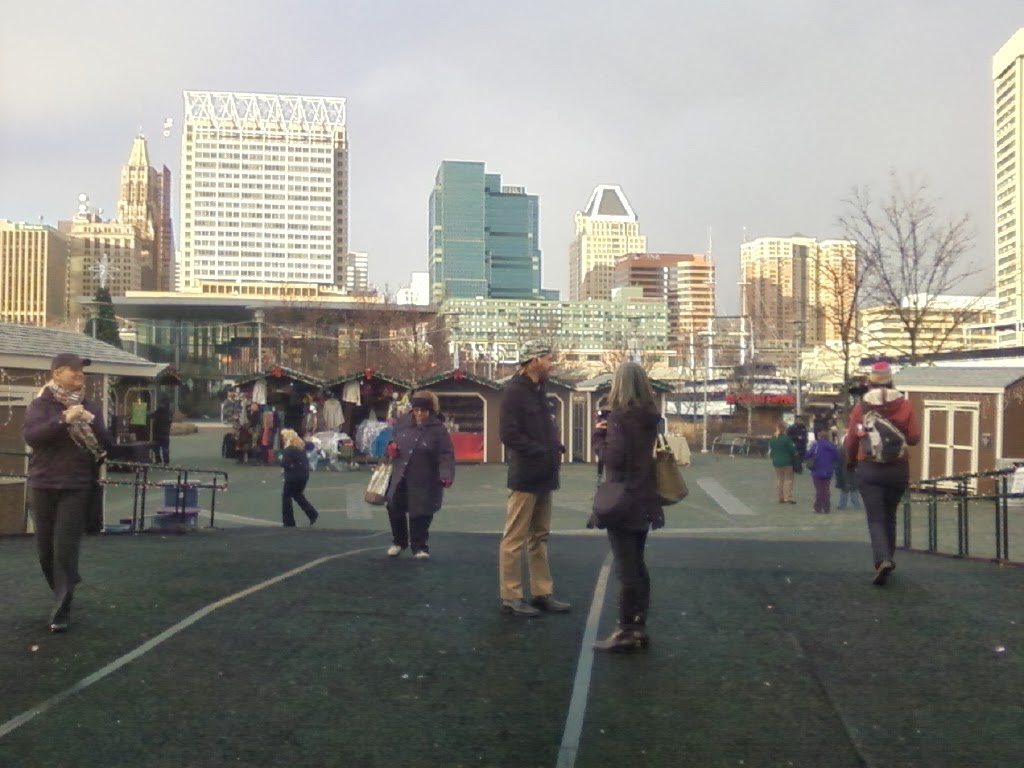 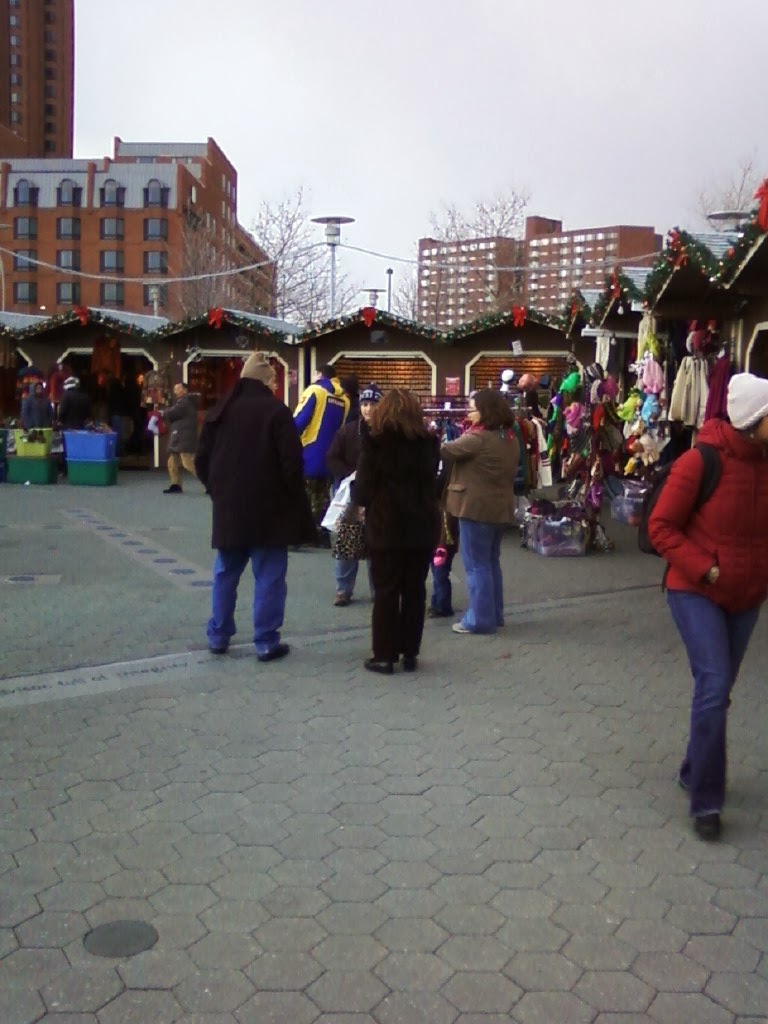 On Christmas Eve we went for a trip to the Baltimore Harbor's Christmas market, meant to remind us of Germany's open air shops. It was lovely with the skyline in the background, and open charming shops full of international items. While there, big fluffy snow started falling,


We shared a mug of warm holiday wine, and it felt very holiday-like! 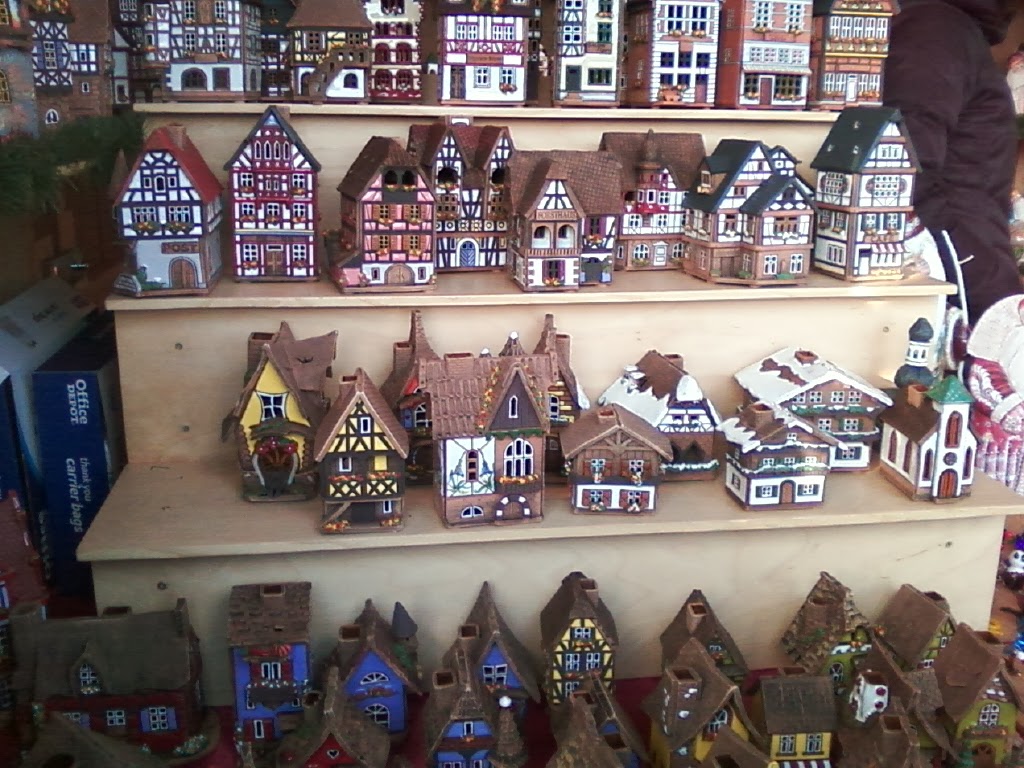 I liked a lot of items, including little wooden carvings that spin around from the heat of candle flames, but they were more money than I wanted to spend, so i chose one of these little charming pottery houses made in Lithuania.

Isn't this view charming, the lights and seagull, cold but the snow had stopped. 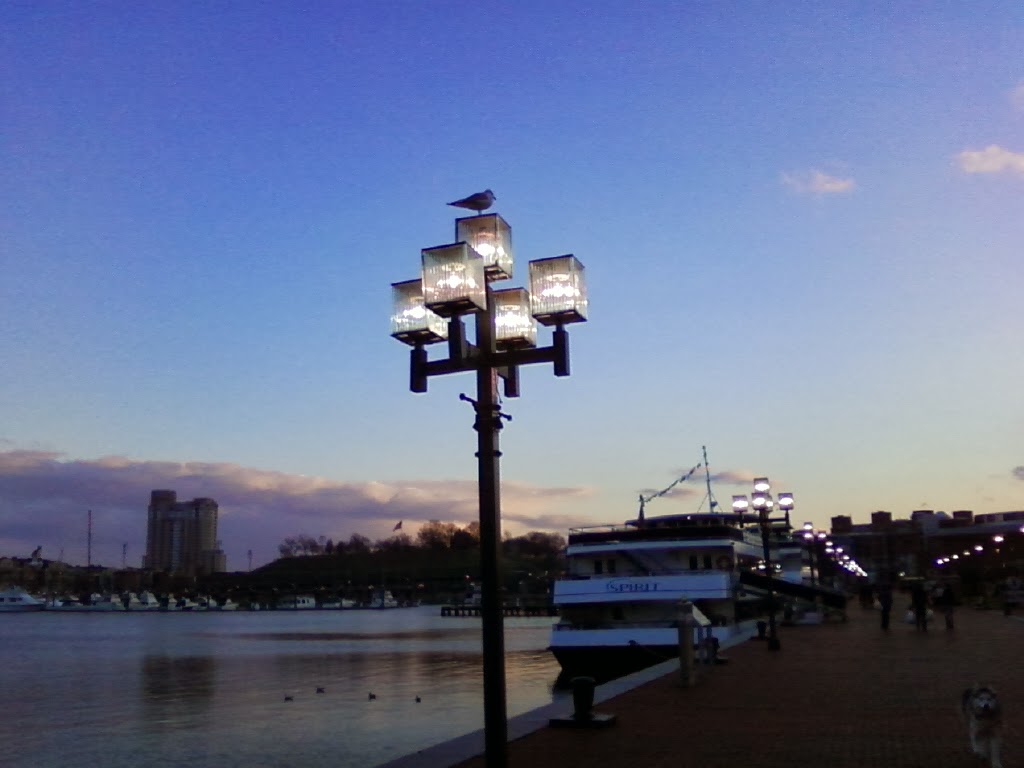 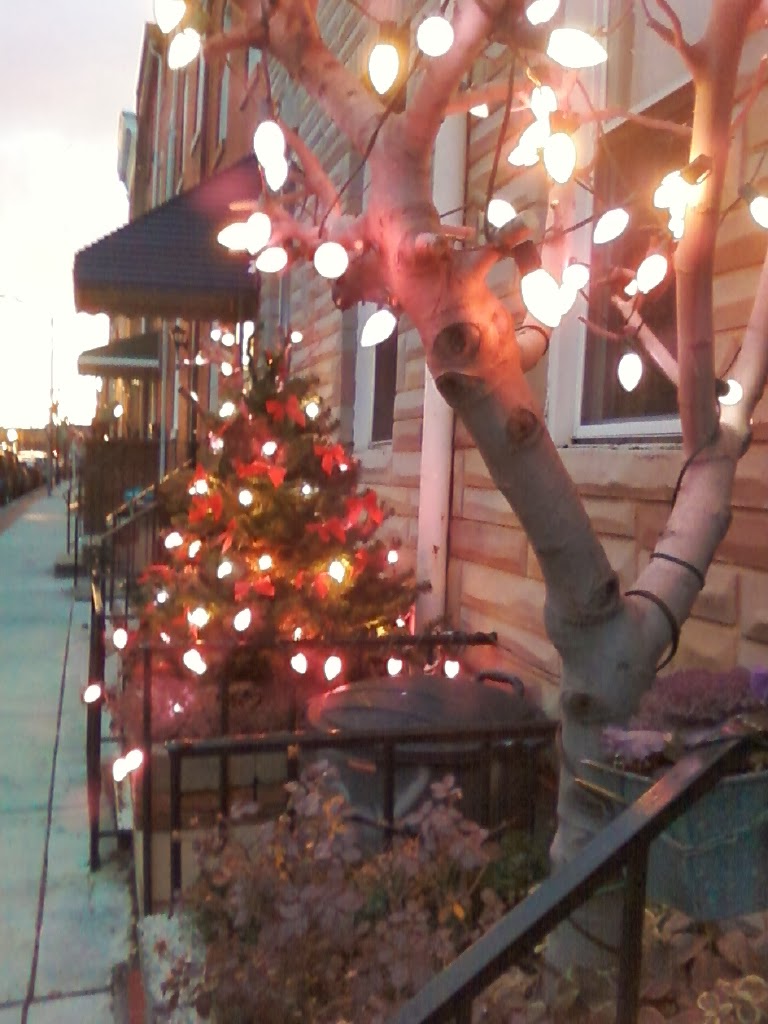 We went to Little Italy around the other side of the harbor, for dinner but "our place" Amicci's was closed, so we walked around looking at the lights decorating the tiny row houses.

This is old Baltimore. Granite stoops. Wrought iron railings. Doors opening right on the sidewalks. In the summer there are bocci ball tournaments and open air movies shown on sides of buildings.

So in two days we traveled to Baltimore and Washington DC with the feel of also seeing a bit of Germany and Italy. For my friend JoAnne, we went to the bakery and brought home pieces of chocolate cannoli cake for Christmas desserts. 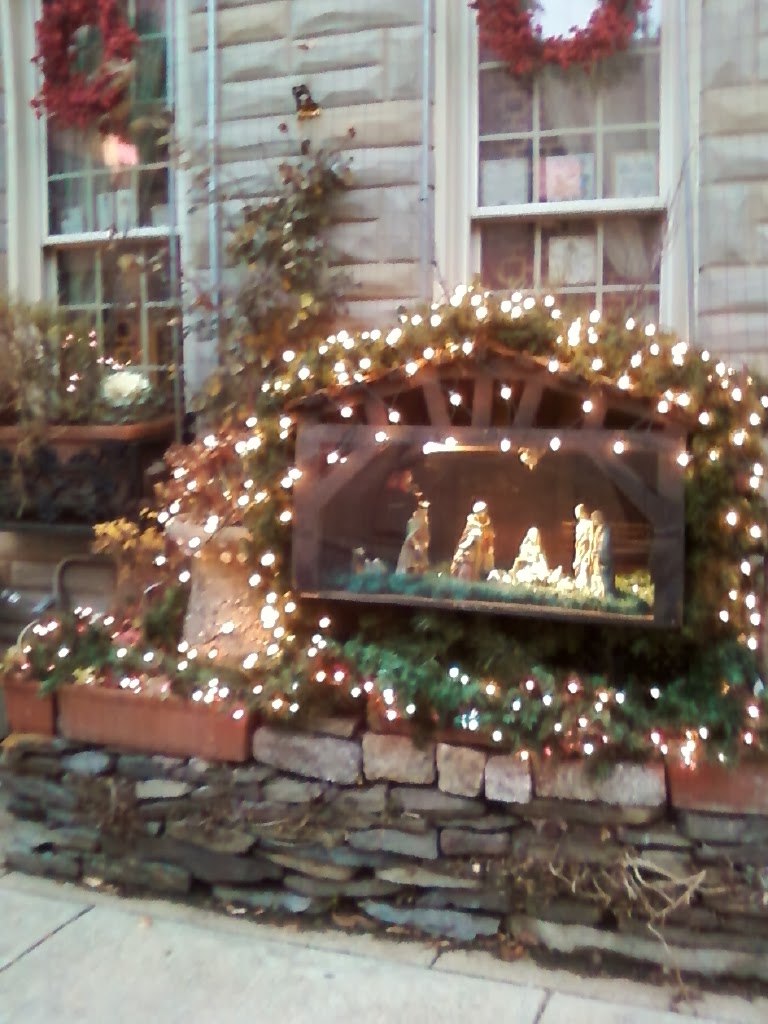 I'll leave you now with the picture of another rowhouse showing the reason for all this celebration...