"I was born a little pup on the Eastern Shore of Maryland. My mom was white as the snow, my dad was a champion dark black like me. My brothers and sisters and I grew up on a farm, going swimming every day with mom, learning from her how to hunt.

One day the humans said someone is coming out to see you... and two of the cutest sweetest humans drove up.

I was, of course, standing peacefully in my water bowl, waiting quietly...watching...knowing this was my day to leave. My two hulking white brothers were throwing themselves at the fence, barking and acting like eeejits, as usual. That's what they did. My little sis always quiet, knew she'd be staying there so she wasn't interested in the newcomers.

To make a long story short, I went over to the woman, said, "pick me up", she did and we locked eyes.

It was all over but the exchange of money and promises to take good care of me. We were in LOVE. I rode home on a pillow in her lap, never having sat in the front seat before.

OH My the world rushed by as we rode. It was kind of overwhelming for a baby of 11 weeks".

LeeAnna here... he's right. It was love at first sight. I had visited two other breeders who had wild pups, running crazy barking, and the energy was all wrong. I told my husband, this might be another aborted attempt, as we'd also been to the SPCA repeatedly, called poodle rescue, and visited the crazy breeders all to no avail.

Cole was so soft, all silken hair and big eyes and sweet face. And those golden brown eyes! Deep and knowing. His temperament was set from the beginning although he was open to training and a fast learner. 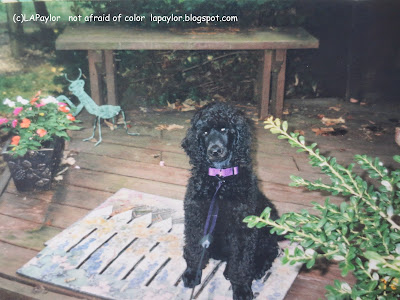 Quiet and thoughtful like my husband. My lab was all me, party girl! Loud, boisterous. She could clear off a coffee table with her wagging tail! Cole was different, our first poodle.

People would ask, is he going to be a poodle?? What!?! Well, yeah, he's going to grow into those feet.

I wanted to name him something French, like D'Artagnan, call him Dart but he misbehaved the day I called him that. I tried out a few names which he also rejected with bad behavior. When I chose Cole, short for Nicholas, as it sounded sleek and suave, he instantly behaved nicely.

This would be the first of moments where he lets me know without language, what he wants.

We soon realized we didn't have a pup exactly. We had a standard poodle.
There is more to the story, but let's stop here for now. 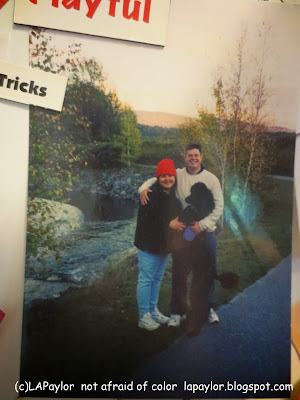 This picture of us in Stowe VT when he was still a puppy, big but not yet a year old, hangs on the fridge.
He has always traveled with us.

Cole has a birthday near mine, he is turning 13 this year. We are both old in body, young in heart.

Email ThisBlogThis!Share to TwitterShare to FacebookShare to Pinterest
Labels: walks-with-poodle