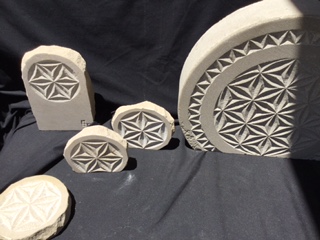 More Crafts from the Basque region... these are sandstone carvings... very inspirational to quilters yes? 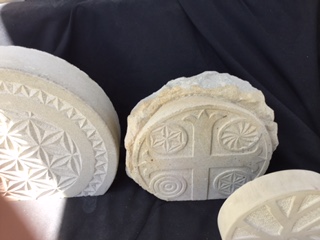 Click on pictures to see details.  Ironworks... I've never seen a chainmail fence! The designs were intricate and similar to quilting patterns. 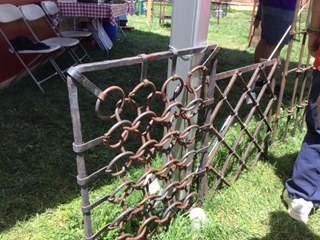 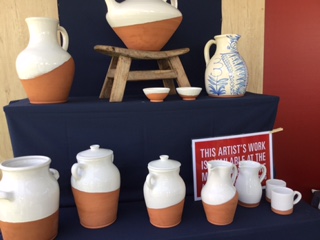 The pottery was clean and spare. I loved the slight tilt of the glaze against the red clay.


There was a woman weaving the most intricate designs but I must not have gotten a picture. She had it on a floor loom, with foot treadles but was lifting individual strings to take the weft through.
All her work was simply blue and white.

Here is a video of the laborious slow spinning being done by an artisan with the coarse wool. (link to youtube is http://www.youtube.com/watch?v=wg_Nhmiqt0Y)
He did not understand one word of English I spoke. The interpreter didn't understand him or my question.
Hand gestures did not get a response either... oy! The process was probably the slowest I've ever seen done by a drop spindle. He seemed to be having a lot of trouble with the wool. In the tent was a vile smelling tub of what I think was cheese in the making from sheep. Whew!
People repellent.
Meanwhile in Sounds of California there was an awesome discussion of Buddhist music, chants, and dance in which to participate. The speaker praised us for wanting to learn about other cultures and connect with people.


Yea! Wish all people wanted to learn about others and accept the different cultures. Don't you? n
This video is the final dance and a pan shot of the crowd. The dance is like fish swimming with the current.

The ringing bowls played by a participant have prayers carved into the  metal, and as a stick is run along the rim, it rings out that prayer into the universe.

No matter your religious beliefs, or lack of religious belief, it's been studied and proven that prayers have power. Maybe there is more under Heaven than we know of. I certainly don't know enough about it but believe where two people come together, and send out energy of connection, there will be improvement in lives.
That's what I believe. There is hope. There can be acceptance of differences.One at a time, We can influence each other to accept and love.

As we celebrate independence, let us also celebrate union of spirit

Email ThisBlogThis!Share to TwitterShare to FacebookShare to Pinterest
Labels: folklife festival in DC